Tom Crean served both Scott and Shackleton and outlived them both.

Tom Crean was one of ten children, he was born on the family farm at Annascaul on the Dingle Peninsula, County Kerry, Ireland. Life was hard and so Tom joined the Royal Navy at the age of 15, by the age of 22 in 1899, he had worked his way up to the rank of Petty Officer.

He was what is often described as "hardbitten" tough, and determined, he had been disrated in the Navy for drunken and inappropriate behaviour and had a less than satisfactory character reference, this happened just before he joined the Discovery expedition with Scott, the first of three journeys he would make to Antarctica.. He frequently came across as heavy handed and tactless - forthright - to be more charitable.

Crean joined Scott's Discovery expedition when he was in Christchurch, New Zealand in December 1901 serving aboard HMS Ringarooma, the Discovery was also in port and in need of an extra crewmember, he left his own ship to join as a volunteer able seaman. He gained a reputation for being one of the most effective man-haulers in the party and was well liked and respected by the other men. Crean returned to naval duty after the expedition and was promoted to Petty Officer 1st class following Scott's recommendation. Following the Discovery expedition, Scott requested that Crean should join him in serving on his ship and for the next few years, the two served together on a number of vessels.

Crean after his return from
the Southern journey

Crean was one of the men Scott chose first for the Terra Nova expedition, he was appointed as an expert sledger and pony handler, he was also one of the few men on the expedition with previous polar experience. Crean was very actively involved in sledging journeys as might be expected, on one occasion he was caught out camping on sea ice that broke out in the night with Cherry-Garrard and Bowers, they were separated from their sledges, Crean jumped from floe to floe and was able to summon help.

Crean was involved with depot laying in January-March 1911 as preparation for the south pole attempt later in the year. Starting in November 1911 he accompanied Scott's Polar Party initially by leading a pony named Bones pulling a sledge of supplies until the ponies were killed as the party progressed. He was a part of the last group to be turned back 160 miles from the pole by Scott after not being selected for the final Pole Party,  He set off back with Lashly and Edward Evans, a 730 mile journey. They lost their way at one point and with food supplies low and a long detour around an icefall the safest route, instead decided to sledge uncontrolled down the steep icefall, reaching what Evans estimated at 60mph at times, they stopped by overturning the sledge.

Tom Crean had thought that he might have been chosen as one of Scott's party to make the final push to the South Pole, but was overlooked in favour of Bowers, a great disappointment to him. Scott described him as weeping with disappointment at having to turn back so close to the goal.

Evans developed snow blindness after removing his snow goggles while trying to find the route and began to show signs of scurvy, he was greatly weakened, was passing blood and was in constant pain, Crean and Lashly began pulling him on the sledge. On the 18th of February, there was still 35 miles to go and 4-5 days manhauling with just 1-2 days of rations left, they decided that Lashly would stay with Evans while Crean would fetch help. With a little food and no tent or other equipment Crean walked for 18 hours until he met with Atkinson, Gerov at Hut Point. He arrived just before a blizzard struck which would almost have certainly have killed him had he been caught it, as it was he was on the verge of collapse on arrival. Evans who was close to death and Lashly were successfully rescued by the use of a dog team, Crean played down his part but wrote in a letter:

"So it fell to my lot to do the 30 miles for help, and only a couple of biscuits and a stick of chocolate to do it. Well, sir, I was very weak when I reached the hut".

The winter of 1912 was passed in a very sombre atmosphere, the Polar Party had not returned and it was assumed they had perished in the attempt. Crean was one of the last men to see Scott and the pole party alive and he was one of those who found their final camp in November of that year and buried them in the snow.

On return to England Crean was awarded promotion and the Polar and Albert medals for his part in the expedition and for saving Evans' life.

On return from the Terra Nova expedition, Crean resumed his Naval duties at Chatham, Kent until Shackleton began to recruit for his attempt to cross the continent of Antarctica from coast to coast via the South Pole. Shackleton knew Crean from the Discovery expedition and had no hesitation in taking him south with the expedition as second officer. He selected Crean to be one of the party of 6 to make the crossing, it looked like Crean was going to have a chance to reach the pole after all after his disappointment at not being selected by Scott.

The crossing was never to be however and like Shackleton, Crean would not even set foot on Antarctica again. The Endurance was trapped in sea-ice and sank leading to the crew needing to reach safety which they did so partly when they arrived at Elephant Island.

After his Antarctic adventures, he returned to England and resumed his naval career at Chatham. He married Nell Herlihy in 1917 back in his home town of Anascaul, Nell had been his childhood sweetheart, though they were aged 40 and 36 by the time they married. Crean served in the Royal Navy aboard HMS Colleen in the First World War, shortly after the war ended, he was given early retirement at the age of just 42 in 1920 following a bad fall on his ship.

Shackleton wanted Crean to return to Antarctica with him once again on the Quest expedition, but the offer was declined and Tom settled down to married life and raising his family of four daughters.

In 1927 he opened a pub in Annascaul that he called "The South Pole Inn", he ran the pub with Nell until 1938 when after falling ill with stomach pains, he was admitted to hospital in nearby Tralee. Acute appendicitis was diagnosed, but no one was available for the simple routine appendectomy and he was transferred to hospital in Cork 80 miles away. The delay led to infection setting in and he died a week later on 27th July 1938 at the age of 61.

He was interred in a tomb he had built himself in the village of Ballynacourty near where he was born. Almost the entire population of Annascaul turned out to show their respect for one of their most famous sons.

He never spoke of his Antarctic exploits to his family, in the words of his daughter:

"He put his medals and his sword in a box ... and that was that. He was a very humble man".

The South Pole Inn is still in business as an inn, it is decorated inside with Shackleton and Crean memorabilia. It can be found in the village of Annascaul, County Kerry on the main road between Tralee & Dingle.

Tom Crean (right) with Alf Cheetham, on the Endurance, 1914

References to Tom Crean by Scott in "Scott's Last Expedition"

Feature Name: Crean Glacier
Feature Type: glacier
Latitude: 54 08S
Longitude: 037 01W
Description:  Glacier 4 mi long, flowing NW from Wilckens Peaks to the head of Antarctic Bay on the N coast of South Georgia. Surveyed by the SGS in the period 1951-57 and named by the UK-APC. This glacier lies on the route of the overland crossing from King Haakon Bay, to Stromness, South Georgia. 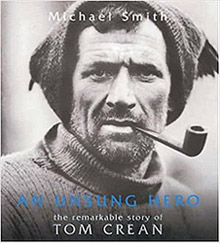