"The departure of the last remaining huskies from Antarctica marks the end of an era . . . . . It will always be difficult for those who have not shared the experience to understand the pure delight of driving behind dogs and being utterly dependent on them for life itself . . . ."

Dogs first arrived in Antarctica on the 17th of February 1899 when 75 were landed by the ship Southern Cross of the British Antarctic Expedition of 1898 - 1900 at Cape Adare in the Ross Sea area. The landing was followed by a four day blizzard which trapped seven men ashore, they had a large tent and survived by bringing all of the dogs in to lie on top of them to keep them warm, dogs in Antarctica proved their worth from the outset.

In April, one of the dogs was thought lost when it was blown out to sea on an ice floe, it turned up in good condition and spirits ten weeks later (around midwinter) demonstrating the ability of dogs to survive in Antarctica. Ole Must and Persen Savio, two Norwegian Laplanders of 22 and 21 years respectively were the first two people to drive dog teams in Antarctica.

The last dogs were taken from Antarctica on Feb 22nd 1994, a consequence of an environmental clause in the Antarctic Treaty that required non-native species to be removed. In the case of dogs, specifically because distemper (a disease of dogs) could potentially spread from the dogs to the native seals of Antarctica.

Two dog teams each pulling a sledge camps for the night, Antarctica 1970's.

In between these times dogs usually huskies brought from Greenland or other places in the Arctic were an integral part of life in Antarctica. They were used sometimes well and sometimes badly, they played a fundamental part in the exploration of the continent and in the science that was carried out in Antarctica when the scientific age took over from the Heroic Age. Men and dogs relied on each other for survival and many of these loyal workers and companions paid the price with their lives.

Dogs and sleds are quick, flexible and able to traverse most of the terrain that Antarctica has to offer, there are no roads or even trails in Antarctica due to the ever moving snow and ice. Inevitably in time dogs were replaced by snowmobiles, though this happened rather slowly. As technology and operating techniques progressed and frequent mechanical break downs reduced, so the mechanical pullers of sleds outperformed the canine. There are also the facts that unused snow mobiles just sit awaiting the time when they are used whereas dogs need year-round feeding and care and that the effective operation of a dog team requires a skill to be learned and experience. From the 1960's on dogs were kept in Antarctica at an ever decreasing number of bases,  Many generations of Antarctic personnel on scientific bases regarded their experiences in Antarctica as being greatly enhanced by the presence of the dogs and the possibility of recreational sledging trips with them.

Dogs in the Scientific Age

The Scientific Age in Antarctica is the period following what was called the Heroic Age of exploration in Antarctica. This is when efforts were made to explore the less obvious geographic features and to discover more about what Antarctica is like, why it is the way it is and how it fits in with the rest of the world.

Dogs proved themselves and lessons were learned about how they should be treated with dog handlers training in the Arctic with experienced people about how to handle them and get the best from them before going to Antarctica. Techniques were perfected, the amount of work that could be done was understood and the amount of food needed by man and dog calculated to optimize health and work rate.

Dogs were used by many nationalities in all parts of Antarctica, they were the transportation method of choice as well as being invaluable for helping with morale at many bases for long after they were replaced by mechanical forms of transport. The British Antarctic Survey and Australian Antarctic Survey used dogs for longer than other nations and to good effect still even when some nations had gone exclusively over to mechanized transport. Dogs were still considered to be the most effective form of transport in mountainous areas into the 1960's when they were supported by aircraft which would land food to re-supply the teams in the field and take geological samples out with them.

The Science of the Sledge Dog

In the 1950's the scientific method began to be applied to sledge dogs and sledging, especially nutrition. A scientist from Cambridge was appointed as a dog physiologist to the British Antarctic Survey base at Hope Bay. He found that a smaller more sturdily built dog could out-pull a heavier one and came up with an "optimal" sledge dog:

A sledge load of 120 lb (54.5kg) per dog was considered to be a fair maximum, this was confirmed with strain gauges measuring the pull a dog could exert, though this could vary by 50% from day to day dependent on a number of factors such as temperature, diet, snow surface and even the mental effects of a long monotonous journey on the dog.

A dog team would usually consist of nine dogs often led by a bitch. Lighter dogs went at the front and heavier workers to the rear. The dogs gave the appearance of enjoying human company and attention and enjoyed their jobs pulling sledges. The center trace was most commonly used, though at other times a fan trace would be used to good effect. In good conditions a team on the Antarctic Peninsula might average 16 miles (26 km  day).

Investigations into nutritional requirements were also made. Sledge dog food requirements were found to vary quite widely from dog to dog, an average requirement was around 2,500 kcal per day when idle and at least 5,000 kcal per day when actively hauling heavy sledges over long distances. These amounts are about 75% of that required by a human under similar conditions. The requirement for active sledging is about the same for a human and dog at 5,000 kcal per day each. The men of course don't continually pull the sledge under those conditions, they do however frequently ski alongside or in front of the sledge and will get off and push through especially difficult terrain such as broken up ice and soft snow. Sledging with dogs is not the restful pursuit that may be imagined!

Where possible dogs were fed with seal meat which was found to be the best overall food, given with blubber and skin in the winter and when working and with less blubber in the summer months when less energy is needed to maintain body temperature and condition. Both dogs and men would often lose weight and condition when out in the field travelling and camping daily. Each dog would be fed 7lb (3.18kg) of seal meat and blubber on alternate days in the winter months, that averages out to the equivalent of about 2 x 8oz. steaks (protein) + 5 x 8oz. blocks of butter (fat) per day.

When travelling dogs would be given pemmican (dried ground meat with fat and other additives) at a rate of 1.25 lb (0.57 kg) per day which when supplemented with seal meat kept them in good condition. Pemmican was not such a good diet for the dogs, often leading to diarrhoea, up to 30% of the food was passed directly out in the faeces without being absorbed (measuring that was a project I'm glad I wasn't involved in!). Dog pemmican based on what humans would eat was replaced by a more dog-friendly version called "Nutrican" (a trade name) which itself underwent improvement with experience. Seal meat, fresh or frozen remained the optimal diet, though there is a difficulty in making sure that meals are uniform in terms of the size of the helping and relative amounts of meat, offal, blubber and skin.

*Halibut and stockfish are often used as a diet for dogs in the Arctic - total % adds up to less than 100, the difference is ash and minerals.

Experiments from 1932 on treadmills showed that enough food could increase a dogs work rate by a factor of three. In one experiment a dog ran for 17 hours with a 5 minute rest each hour, covering 82 miles (132 km) and climbing the equivalent of 14 miles (22.4 km). With low external temperatures to prevent overheating and sufficient water and food, dogs could run virtually tirelessly when exercising aerobically. Poorly fed dogs in the field that were losing weight would often be reported to become more difficult to drive, to lay down exhausted at halts and more difficult to rouse at the start of the day.

Occupational osteoarthritis was found to be a major problem amongst sledge dogs which limited their useful working life to about 7-8 years. The result of continuous work led to erosion of cushioning cartilage pads in the hips and shoulder joints of the dogs from continuous exercise under the pressure placed by the sledge harness.

The story of an Antarctic Sledge Dog - Boo Boo

By 1971, Boo Boo's total mileage was 10,474 on foot (paw). He pulled sledges of over 1,000 lbs accounting for 4,675 tons of supplies moved of which his own contribution was 500 tons. By 1971 Boo Boo was retired, rarely chained up and allowed to wander around the base at will. Much of the summer of 1971 was spent taking pieces from the seal pile to his various "girlfriends", some of whom ended up with significant piles of meat.

The men of the base unofficially named a mountain after Boo Boo whose location remains secret, it is remembered as "Boo Boo's Lost Mountain".

*In the picture Boo Boo is played by a stunt double. 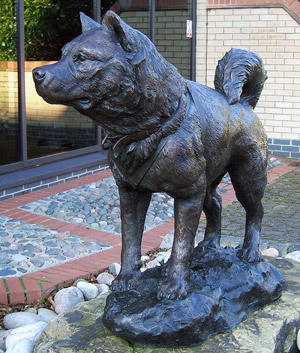 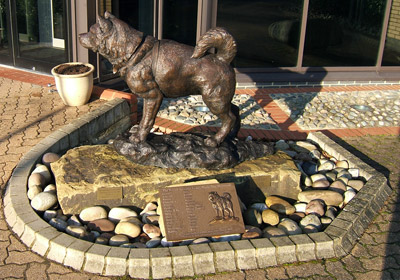 A bronze sculpture of a husky sledge dog of the type used by the British Antarctic Survey in Antarctica between 1945 and 1993 made by sculptor David Cemmick was unveiled on the 4th of July 2009. It stands outside the entrance to BAS headquarters in Cambridge England. Hwfa Jones, Graham Wright and Dick Harbour, all men who had lived and worked with dogs in Antarctica began the project and raised the funds to pay for the statue. More about the memorial

We would like to thank all the people from around the world who have donated to the Fund to ensure this monument has been created. Still so fresh in the minds of those who sledged with dogs, the monument represents a thousand personal stories; most of which will never be told in any official documents. These dogs made possible almost all the overland journeys in the 20th century and shared in the discovery of the continent from which they are now forever banned.
Hwfa Jones

"Dogs shall not be introduced onto land or ice shelves
and dogs currently in those areas shall be removed by April 1 1994".


Dogs were first used by Australians in Antarctica in 1954 when Mawson base was established, they were removed in 1993. 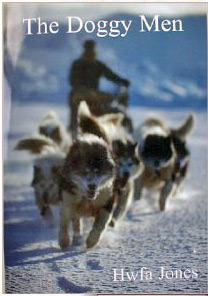 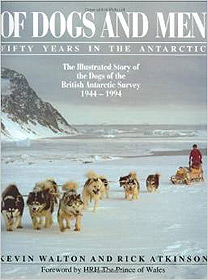 Of Dogs and Men - Book 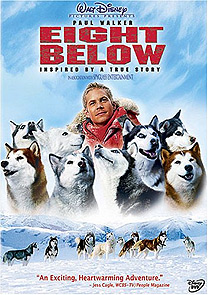 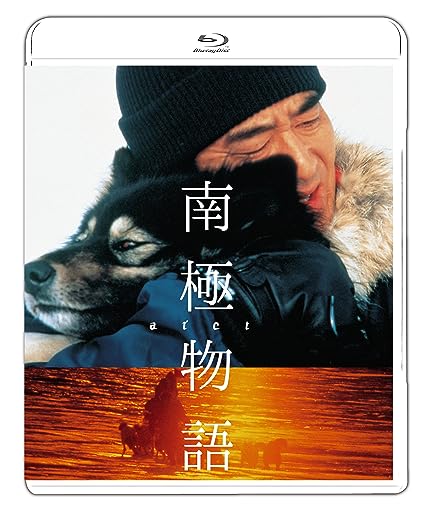 Antarctica (1983) A Japanese Antarctica movie with English subtitles. This is based on a True Story and Legend in Japan. Remade as the Disney movie "8 Below"