While the north and south poles and their wider regions have many similarities, they are also "polar opposites" metaphorically as well as literally in many ways.

The Arctic, centered on the North Pole
Sea surrounded by land

The Antarctic centered on the South Pole
Land surrounded by sea

1/ The North and South Poles

If you were to stand at either pole, the view would be superficially very similar, there would be a great expanse of flat (ish) white snow and ice as far as the eye can see with few or no other features to break up the vista. The two landscapes however are made up in very different ways.

The North Pole
A point in the Arctic Ocean

The ice you are standing on is 1m to 3m (3-10ft) thick floating on the Arctic Ocean, it is made of frozen sea water with some snow on top, sea level is usually no more than 1m below your feet and the sea bed another 4,260m below that. The ice may be flat and smooth or rough, having been broken up and refrozen together again.

The ice is moving at anywhere from a snails' pace to walking pace.

You are about 730km from the nearest land at the northern tip of Greenland.

Temperatures here are estimated from those measured elsewhere in the Arctic, as there are no structures or settlements out on the ocean, the ice is too unreliable and unstable.

There is no physical North Pole.

Light and dark. At the north pole the sun is continually above the horizon from the March equinox to the September equinox reaching a high point of 23.5° at the summer solstice around June the 21st. From September to March it is continually below the horizon.

The South Pole has the opposite to this with the sun at its highest around the 21st of December, midsummer to the North Poles midwinter.

You are standing at an altitude of about 2,835m (9,300ft) on ice that is 2,700m (9,000ft) thick, it reaches down to rock which rises to just over 100m above sea level, this rock is pushed into the earth's mantle by the weight of the ice. Altitude sickness is a risk at the South Pole for new arrivals arriving by plane. The ice is made from accumulated snowfall that has built up because it never melts.

The ice is moving towards the Weddell Sea in the west at about 10m (33ft) per year.

You are about 1,300km from the nearest sea at the Bay of Whales.

Temperatures have been measured at the South Pole since 1956 as there is a large research station there.

The ice is moving at the south pole at a speed of about 10m (33 feet) per year. There is a ceremonial south pole which is repositioned every year on the first of January. 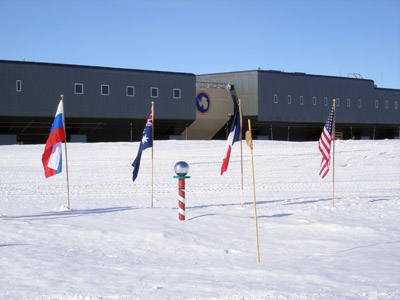 2/ Topography - the arrangement of the land and sea

The Arctic region contains a wide range of landscapes; plains, mountains, some very large significant rivers and lakes, rolling hills, huge stretches of tundra and the edge of the largest biome in the world, the taiga.

The ice in the Arctic Ocean is largely formed from the frozen sea and contained by the surrounding land masses. It contains a large proportion of multi year sea-ice that is 3-4m (10-13 feet) thick with some much thicker ridges. Greenland has the largest ice cap in the Arctic (and second largest in the world after the Antarctic ice cap) other than this permanent ice is quite rare and relatively small in extent. Ice bergs form when the edges of the Greenland ice sheet reach the sea, most of the ice in the Arctic even in the summer is frozen sea ice.

Antarctica is 98% covered in ice which means that away from coastal regions (and even including many coastal regions) the landscape is icy mountains, glaciers or smooth ice-sheet. There are no significant rivers and none that flow year round, lakes are small, rare and often permanently frozen over, there is very little land vegetation, and no grassland, shrubs or trees. There are small areas of tundra on the Antarctic Peninsula and larger expanses on a number of Antarctic and sub Antarctic islands (though nothing like the huge areas found in the Arctic).

The total surface area of Antarctica approximately doubles each winter as sea-ice forms around the coasts, in the summer this ice breaks up and drifts north mainly melting as it does so, Antarctic sea-ice is therefore mainly first year ice. The great ice sheets of Antarctica calve enormous ice bergs into the sea that are measured in square miles (sometimes hundreds or thousands of them), much of the ice in Antarctic waters especially in the summer is freshwater ice from glaciers and ice sheets.

The climate of both polar regions consists of long cold winters and short cool summers (or at least less cold than the winter)  there is a spring and autumn (fall) but if you blink you might miss them. You could say that there are two seasons, one cold and bright, the other colder and dark.

The Arctic is not as cold as the Antarctic for two main reasons, firstly the effect of the sea that doesn't fall below -2°C which means that the whole of the arctic polar region and coastal regions are kept relatively warm even though the sea is covered by ice. Secondly, Antarctica is the highest of all the continents at an average height of 2,300m (7,546 feet or 1.4 miles) more than twice the average height of Asia, the next in line and 3-6 times as high as the other continents. Temperature falls as altitude increases at the rate of about 1°C per 100m.

There is also an effect that the weather in Antarctica is driven round and round the continent by circumpolar winds and currents so keeping it within Antarctica, whereas the weather in the Arctic spills out to the south and weather from the south spills into the arctic, this adds to Antarctica being colder than the Arctic as it keeps its cold to itself rather than swapping weather with nearby regions.

The coldest temperature ever recorded on earth was -89.2°C (-128.6°F) on July 21st 1983 at the Russian base at the Southern Geomagnetic Pole in Antarctica.

Plant life in the Arctic is characterized largely by what grows on the tundra, a vast low growing treeless area of approx. 11.5M km2 that is mainly underlain by permafrost. There are low shrubs (as tall as 2m (7 feet) in rare places) sedges, grasses, mosses and liverworts as well as an extensive variety of alpine type flowering plants and many lichens. There are about 1,700 species of plants that live on the tundra in all. The tundra can support many larger herbivores including reindeer, musk ox, lemmings, arctic hares and squirrels. To the southern edge of the arctic, the tundra can have plant cover of 80-100%, further north, plant coverage can be 0% or just a few hardy alpines in sheltered microclimates.

Plant life in the Antarctic on the other hand is much less plentiful. Only about 1% of the continent is ice free, this is located mainly along the Antarctic Peninsula and on islands, there are some exposed rocks inland however known as nunataks where the hardiest of plants can gain a foothold. There are just two species of higher plants, a grass and a small flowering alpine, around 100 species of moss, 300-400 species of lichens and 25 species of liverworts. In very extreme conditions, algae and lichens live in tiny pore spaces inside rock

Often where plants are found growing in Antarctica, they are sparse and irregularly spaced.

The seas. Both the Arctic and Antarctic have highly productive seas the production being driven by phytoplankton. Upwelling currents bringing nutrients with them and long days in the summer months drive this production.

The Arctic has many large land animals including reindeer, musk ox, lemmings, arctic hares, arctic terns, snowy owls, squirrels, arctic fox and polar bears. As the Arctic is a part of the land masses of Europe, North America and Asia, these animals can migrate south in the winter and head back to the north again in the more productive summer months. There are a lot of these animals in total because the Arctic is so big. The land isn't so productive however so large concentrations are very rare and predators tend to have very large ranges in order to be able to get enough to eat in the longer term.

There are also many kinds of large marine animals such as walrus and seals such as the bearded, harp, ringed, spotted and hooded. Narwhals and other whales are present but not as plentiful as they were in pre-whaling days.

The largest land animal in the Antarctic is an insect, a wingless midge, Belgica antarctica, less than 1.3cm (0.5in) long. There are no flying insects (they'd get blown away).

There are however a great many animals that feed in the sea though come onto the land for part or most of their lives, these include huge numbers of adelie, chinstrap, gentoo, king, emperor, rockhopper and macaroni penguins. Fur, leopard, Weddell, elephant and crabeater seals (crabeater seals are the second most populous large mammal on the planet after man) and many other kinds of birds such as albatrosses and assorted petrels. There are places in Antarctica where the wildlife reaches incredible densities, the more so for not suffering any human hunting.

There are many indigenous peoples who live around the Arctic. There are representatives of many different groups such as the Inuit, Chukchi, Sami, Yupik, Inupiat and others. The presence of humans is one of the biggest differences between the two poles. Typically the people who live in the far north are nomadic and are hunter/gatherers with the emphasis on hunting rather than gathering, though the Sami people of Scandinavia amongst others are reindeer herders.

The presence of people in the arctic due to overland access from the south has influenced the region enormously and it has been inhabited for several thousand years. There are many villages, towns and cities dotted around the Arctic the largest being Murmansk with 325,100 inhabitants the rest of the top 5 largest being 135,000, 85,000, 62,000 and 58,000.

Antarctica has never had any native people living there. No one set eyes on Antarctica until 1820, the first human foot stepped ashore a year or two later and it was 1898 before people stayed ashore for a whole year. Other than temporary sealing and whaling stations in the early days, Antarctica has only ever been habited by scientific stations and their personnel who only stay for a year or two. There are still no real native Antarcticans who were born there and have always lived there and always will.

The largest habitation is the American base at McMurdo with 1,000 people in the summer, though only 250 in the winter. Over the whole of Antarctica there are around 4-5,000 summer visitors at scientific stations with about 1,000 of them remaining for the winter. They are greatly outnumbered by ships which bring 30-40,000 tourists each summer for typically 6-14 days each, though tourists are not there at all in the winter.