The Cloudmaker is a massive mountain in the Transantarctic mountain chain that stretches for 3.500km (2,200 miles), it is one of the longest mountain ranges on earth. The Cloudmaker is 2,680 metres (8,800 ft) high and situated at 84°17'S 169°25'E. It towers over the Beardmore Glacier on the west side. It is easily recognised from its high, steep, ice-free slope down to the glacier.

It was named during Shackleton's British Antarctic Expedition, 1907-09 (The Nimrod Expedition) for a summit cloud that often appears. It provides a useful landmark in the area of the Beardmore Glacier.

The Cloudmaker mountain with the Beardmore Glacier towards the bottom of the picture.
picture used under CC BY NC SA 3.0 licence, from Antarctic-Glaciers.org

Peaks and glaciers in the Transantarctic Mountains.

Geology and a historical perspective

Captain Scott and his party to the South Pole in 1911-1912 were the first people to collect rock samples from the Transantarctic Mountains in the region of the Beardmore Glacier. Some of these samples collected were of fossil plants which showed that in the distant geological past Antarctica had a tropical climate. This data contributed to the evidence for plate tectonics which was contested at the time. It wasn't that the temperature at the poles had been tropical, but that the continent of Antarctica had been in tropical latitudes at the time and then drifted towards and over and the pole where it is today.

A modern camp on the Beardmore Glacier to study the geology of the area, December 2003.

Fossil leaves found in rocks alongside the Beardmore Glacier 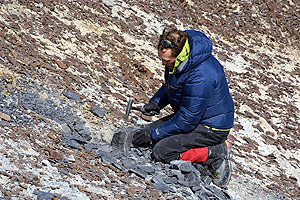 A geologist in 2014 cracking open rocks to reveal plants fossils from the Triassic era, over 200 million years ago.

Topographic Reconnaissance maps of Antarctica. Originally published at 1:250,000-scale by the U.S. Geological Survey in cooperation with the National Science Foundation.