Antarctica doesn't have any long term residents everyone who goes is a visitor for a short time. There are two groups of visitors who can have an impact on Antarctica, tourists and those who go as part of a national Antarctic programme.

The Impact of Visitors - Numbers 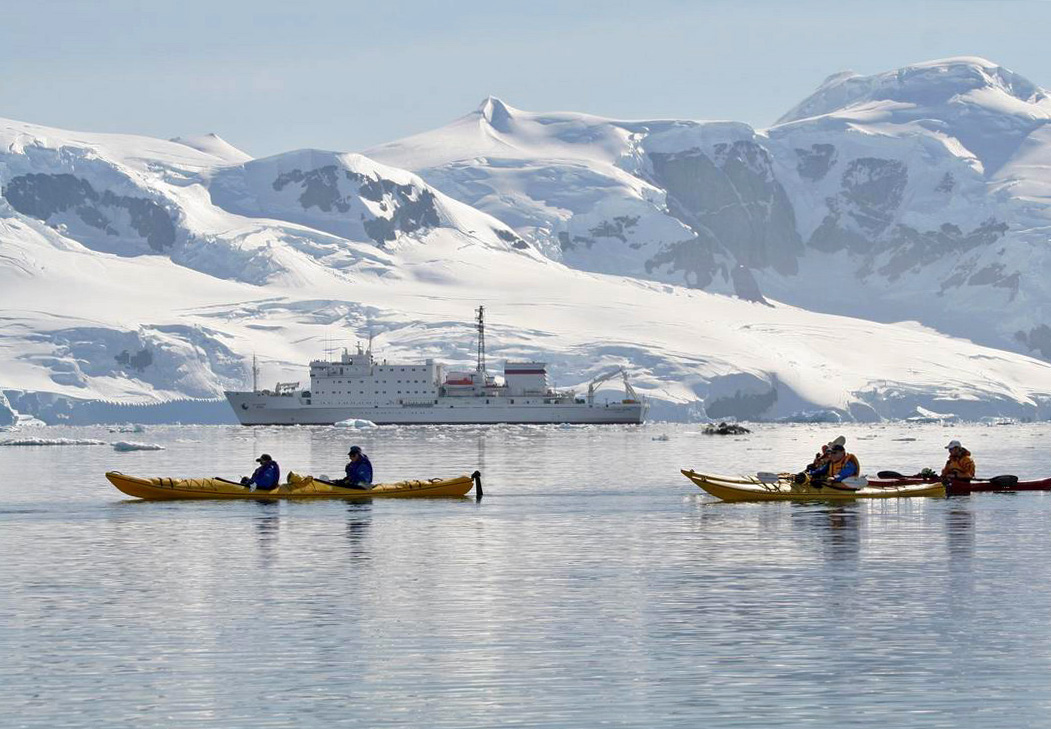 In terms of raw numbers, tourists greatly outnumber national programme personnel 55,489 tourists as against 4,000 on research stations in the peak season so far in 2018/2019. The previous peak in 2008 led to a call for tourist numbers to be limited as that figure was up 14% on the previous season, the last two seasons for which data is available (writing in 2020) have exceeded this and the trend has been upwards for several years now.

Very large ships (500 passengers +) no longer go to Antarctica, these used to account for large numbers of the counted tourists. They tended not to make any landings and only made a fleeting visit of 2 or 3 days out of a longer wider ranging cruise. These large ships were a great concern as an incident involving an oil or fuel spill from them would have been very significant. Any kind of rescue or evacuation would also have been very difficult owing to the large numbers of people on board.

National scientific station personnel clock up far more total days however, as each person is in Antarctica for at least several months and commonly up to a year or more as against 7-10 days for the majority of tourists, so  impacts are difficult to compare directly.

Note - The Antarctic tourist season is in the austral (southern hemisphere) summer from November to March, and spans part of two calendar years, so seasons are referred to as 2018-2019 meaning from November 2018 to March 2019 for instance.

Tourist numbers in Antarctica since 2002

Landed - those who set foot on the continent or an island in Antarctica whether they arrived by ship or air, such tourists typically spend 6-30 days in Antarctica.

All - tourists who went to Antarctica whether or not they set foot ashore.

The difference represents those people who went but didn't land, this group typically cruise for just 3-4 days in Antarctic waters as part of a longer cruise trip and also includes those who overfly in a sight-seeing flight taking a matter of hours.

While tourists may only only spend a relatively small time on landings, usually just a few hours, it is by its nature relatively high-impact time - compared to a scientist or support worker who spend most of their time on a permanently or semi-permanently occupied base. Tourists also by their nature will want to visit the most picturesque and wildlife rich areas of Antarctica. Such areas that are also easily accessible by the kind of small boats that take tourists from their ship to shore are relatively rare in Antarctica, so despite its enormous size, tourists become concentrated in a few areas where most landings take place. A tour ship carries far more people than the entire compliment of most Antarctic bases.

Those national programmes that are supplied by ship (as the majority are) have relatively few visits of those ships, 2-3 over 5 months is typical. In the season, the great majority of all shipping activity in Antarctica is of tour ships that go back and forth to South America every 2 weeks or less. There have been accidents with ships being grounded on uncharted rocks and there have been oil-spills. Evan with the best safe-guards in the world, and it has to be said that marine regulations for Antarctic ships, both statuary and self-imposed are as good as they get, the more ships there are, the more accidents there will be.

Tourism in Antarctica is at present self-regulated by the International Association of Antarctic Tour Operators (IAATO) founded in 1991 and currently with 113 members. This is an organization that applies strict guidelines to its member tour operators and ships. Such guidelines limit the size of the ships that can cruise Antarctic waters and also how many people can be landed at sites around Antarctica. So far IAATO is perceived as being successful in its aims and in regulation for Antarctic protection - though there are always those who would have no tourism at all. 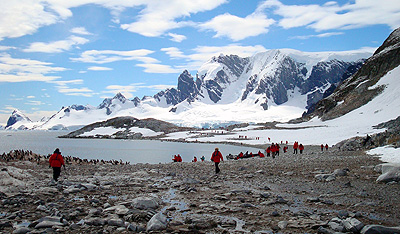 Another threat comes from smaller expeditions that are becoming increasingly common by individuals and small parties. Antarctica requires careful planning and a series of fail-safe rescue procedures if anyone gets into difficulty. These smaller expeditions sometimes fail to do this adequately and resort to "humanitarian" requests for aid from shipping or nearby national bases when they get into difficulty. In recent years for example a small helicopter (totally unsuitable for the task) crashed into the sea off the Antarctic Peninsula requiring rescue and an attempt to fly across Antarctica via the pole in a small aircraft ended with the aircraft crashing and the pilot being rescued by nearby base personnel.

There is no guarantee that derelict or crashed vehicles left by private expeditioners will be removed from Antarctica as they should be under the terms of the Antarctic Treaty.

How many tourists go to Antarctica as and where do they come from?

What do tourists do once they are in Antarctica?

The Negative Impacts of Visitors

The Positive Effects of Visitors

In 2009 the IMO (International Maritime Organization) approved an amendment to MARPOL (International Convention for the Prevention of Pollution from Ships - MARPOL being short for Marine Pollution) banning the use and carriage of heavy and intermediate fuel oils for all shipping in the Antarctic Treaty Area.

This ban mainly affected large cruise ships that operated "cruise-only" tourism without landings, these ships carry 500+ passengers. As a result of this overall tourism numbers fell from the then peak of 47,225 in 2006-2007, with the difference due largely to the large passenger ships leaving the Antarctic market.

These larger ships posed the biggest potential threat to Antarctica from fuel leaks as they carry so much and from potential sinking, as they no longer sail to Antarctica the risk is reduced greatly especially as they are not ice-strengthened and so are much more vulnerable to damage. 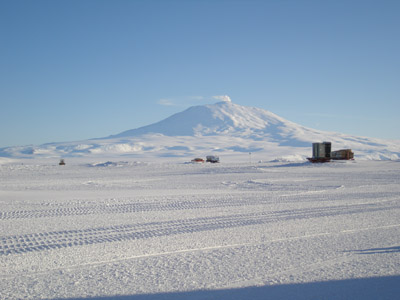 On the 28th of November 1979 Flight TE901 left Auckland New Zealand for a sightseeing flight over Antarctica. Such flights had run many times before from Australia and New Zealand (the first such flight was in 1977). The flight was due to take 11 hours with about 4 hours flying over Antarctic sea ice and mountains so the passengers could see it through the windows.

Due to a sequence of errors, the aircraft ended up flying in atmospheric near whiteout conditions where it was difficult or impossible to see clearly what lay ahead and instead of flying low over flat sea-ice as intended, the plane headed towards Mount Erebus (3,794 m - 12,448 ft),  and crashed into the lower slopes. There were no warning radio messages sent and it seems that until the final few moments no-one on the aircraft knew that anything was wrong. All 257 passengers and crew were killed instantly.

Similar sightseeing flights were suspended and not reinstated until 1994, 15 years later when Qantas (Australia) resumed flights, there have not been any subsequent New Zealand flights of this nature. The remains of the aircraft are still on the slopes of Mt. Erebus, the remains of the passengers and crew were recovered as far as possible and repatriated to New Zealand.
The story in greater depth from New Zealand History.

There have so far been no major pollution incidents or losses of life in Antarctica as a result of ship borne tourism, though there was a very close call on the 23rd of November 2007 with the holing and subsequent sinking by an iceberg of the M/V Explorer in the Bransfield Strait.

Fortunately for the passengers and crew of the Explorer the collision occurred in calm conditions, so everyone was able to get off the ship safely and into lifeboats. It was especially fortunate as having done so, they found that some of the boats were inadequate in that they were open and not even large enough for all on board to sit down and 3 out of 4 of the powered boats engines didn't work. Had it been in the dark and with a rough sea, the story may have been very different.

The passengers and crew spent about 4 hours drifting in the lifeboats before being rescued by other cruise ships in the area, about 15 hours after this the ship sank in around 1,500m (4,920 feet) of water. This despite the ship having  a double-reinforced hull to withstand submerged ice.

The ship sank carrying approximately 178m3 of diesel, 24m3 of lube oil and 1,200 L of gasoline. A surface oil slick 1.5km long and covering 2.5km2 was reported by the Chilean Navy a few days afterwards which grew to about 5km2  though this represents only a few cubic meters of oil. Further slicks were seen in the days following implying there was a slow leak from one or more tanks.

While the lower temperatures in the Antarctic mean that spills may persist longer than in warmer climates, it seems that the generally rougher seas help to disperse spills more quickly. The Explorer was well away from the nearest land, so the slick was dispersed before it came ashore.

The factors of a relatively small ship, calm weather and sinking in deep water well away from land meant that this shipwreck was no-where near as damaging as it might have been for the people involved and also for the environment - these factors however were as much to do with luck as was the ship hitting a piece of ice that holed her in the first place.

Guardian newspaper article. Explorers or boys messing about? Either way, taxpayer gets rescue bill  January 28 2003.  Their last expedition ended in farce when the Russians threatened to send in military planes to intercept them as they tried to cross into Siberia via the icebound Bering Strait