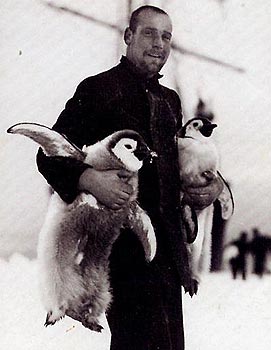 Huberht Taylor Hudson (the spelling used of the first name is the old Anglo-Saxon way, rather than the more common Hubert)

A son of a London minister and second eldest of seven children, born in Holloway. Joined the merchant service in1901 and commissioned to the Royal Naval Reserve in 1913, a mate in the Royal Navy when he signed on with Shackleton's expedition.

Hudson was regarded as something of a dull character, he earned himself the nickname "Buddha" following an event when moored at South Georgia. The crew had convinced him that he had been invited to a "costume party" (a rather grand fancy-dress event) on shore given by the whaling station manager. They encouraged him to dress as Buddha, removing most his clothing and replacing it with a bedsheet and tea-pot lid tied onto the top of his head with ribbons. He was rowed ashore through blowing snow and sleet to find that while there was a party underway (of a very un-grand nature), that he was the only one wearing any kind of fancy dress costume.

The expedition's best penguin-catcher a skill of great value during the time that the crew drifted on the pack-ice of the Weddell Sea and while awaiting rescue on Elephant Island. Hudson took charge of the lifeboat Stancomb Wills on the journey to Elephant Island though had an uncomfortable journey. While on Elephant Island, he spent most of his time in the hut with Blackborow suffering from a nervous breakdown and a badly infected abscess on the buttock. An attempt to drain this by McIlroy and Macklin yielded more than two pints of foul smelling fluid.

After the expedition, Hudson served on "mystery ships" (also known as Q boats) during the First World War. Afterwards he joined the British India Navigation Society. Despite health problems, he served as a Commodore in the Royal Naval Reserve working mainly on convoy duty. He was killed in action on the 15th of June 1942 at age 55 on HMS Eaglet when the ship was torpedoed and sank.