Oceanographer William Spiers Bruce, the leader of the expedition had been to the Antarctic previously in 1892-93 as part of a Dundee whaling industry expedition to search for right whales following the overfishing of this species in the Arctic, he had also been part of the Jackson-Harmsworth expedition to Franz Josef Land (Arctic) in 1896-97 and had visited Spitsbergen (Svalbard) also in the Arctic in 1898.

He had wanted to return to the Antarctic since returning in 1893, slowly building support for a Scottish National Antarctic expedition though donors were not forthcoming until the Coats brothers donated £30,400 of £36,405 total funds raised.

His intention was to explore in the Weddell Sea using the South Orkney Islands as a starting base also studying the wildlife in the islands. Little was known of the Weddell Sea or how far south it stretched, what was well known was that navigation there could be very difficult due to heavy sea-ice conditions. A Norwegian ship was purchased and underwent repairs, ice strengthening and fitting with onboard laboratories, it was admirably suited for its task though the work had cost significantly more than the initial estimates even when much of the design and overseeing work was given for free.

While "Science" was the talisman of the Expedition, "Scotland" was emblazoned on its flag; and it may be that, in endeavouring to serve humanity by adding another link to the golden chain of science, we have also shown that the nationality of Scotland is a power that must be reckoned with.
- Bruce

The Scotia sailed from the river Clyde Glasgow on the 2nd of November 1902, after several stopovers the South Orkney's were sighted on the 4th of February 1903 and a landing made on Saddle Island, the first landing on the islands since 1838. They set off south to enter the Weddell Sea struggling through pack-ice and slowly reaching a farthest South of 70 deg 25', the last 25 minutes of latitude taking a week to cover. Decreasing daylight and falling temperatures heralded the approach of winter so they headed north once more to the South Orkneys to overwinter arriving on the 21st of March. A few days later, they anchored on the south side of Laurie Island at a place they called Scotia Bay. The South Orkney islands are generally precipitous, scenic and have rugged terrain and Laurie island lived up to the description.

Three days later the sea froze over and the Scotia was prepared for the winter, sails and the highest yards were taken down and snow used against the sides of the ship to provide extra insulation and prevent access by the wind. A large stone building named Omond House was built ashore from local stones and roofed with sails. Mattresses, stoves and hammocks were installed along with a wood floor, it was declared to be quite comfortable, the intention was that this would be used by a party remaining the next summer when the Scotia sailed south to the Weddell Sea once again.

The men settled into a winter routine, they surveyed their island home, the second largest of the South Orkney's group and collected marine and terrestrial biological specimens. The winter passed peacefully, without any great hardship and relatively comfortably, there are no recorded instances of friction between the winterers. The first engineer Alan Ramsay died of a heat condition on the 6th of August, he had been ill since leaving Scotland and declined steadily though kept his symptoms to himself while he could not wanting to be sent home and jeopardise the expedition. Eventually he was relieved of duties and spent most his time lying in a deck chair near the cabin stove, spending several months in this state. Bruce nursed him in his final hours, he was buried near a hill that was named after him.

Penguins had been taken for food the previous autumn and much appreciated, in the spring, the returning abundance of animal life was once again appreciated for their finer points and their gastronomic potential with thousands of penguin eggs being stored for the following winter.

Sledging journeys were undertaken using dog teams. Weddell had reported grass on the island which was found to be lichens on closer inspection. The nature of the rocks caused the scientists to postulate that the islands were the remnants of a once larger landmass including Patagonia and Tierra Del Fuego, they are now know to be part of the Scotia Arc that reaches from there through South Georgia, the South Sandwich Islands, the South Orkneys and connects with the Antarctic Peninsula.

In late November, a party of six were left at Omond House while Bruce on the Scotia headed north again. The Scotia was dry docked and underwent repairs at Buenos Aires where three Argentinians now joined the ship, these three were to be left at Omond House with two of Bruce's men the following winter. Back on Laurie Island the six remaining men carried out observations on the wildlife during the summer season including many of the first studies on such animals as penguins and cape petrels. They rebuilt one wall of Omond house as it started to collapse in the summer thaw, having been originally been built on frozen earth rather than rock as thought. A rationing plan was devised in case the Scotia did not return, a very real prospect in the early days of polar exploration if the ship couldn't through unexpected sea-ice or was even crushed and sunk.

The ship did arrive however on the 22nd of February 1904, supplies and the five man wintering team were left behind, they would be picked up the following year by the Argentinian government. The Scotia sailed south into the Weddell Sea once again, due to much clearer ice conditions than the previous year, they proceeded further and much more quickly encountering an ice barrier with an ice sky beyond that they called "Coats Land" and thought but could not prove that it was the edge of the Antarctic continent rather than an island.

On the 7th of March, the Scotia was trapped amongst slush and pack ice in a blizzard, she was lifted 4 feet by the pressure of the ice, groaning under the pressure as she was forced to drift with the ice. The temperature was dropping and the sea around the Scotia freezing, the men began to think about overwintering in the ice, blissfully unaware of the dangers this would pose, it was in this region that Shackleton's Endurance would be trapped and crushed ten years later.

Luck was on their side however and by the 14th of March, rising temperatures and winds from the south enabled the ship to get underway again, three weeks later by the 5th of April, the last of the pack had been left behind and the Scotia sailed for Scotland via some Atlantic stopovers. They reached Ireland on the 15th of July and waited another six days to arrive in Glasgow at a preset date where a triumphant return had been arranged for cheering crowds.

Back at Omond House, the five winterers had settled into a routine of observations and collecting specimens. Omond House was built on a low isthmus of land between two higher parts of Laurie Island with a bay either side, Scotia Bay and Uruguay Cove with a ridge in-between. This gave good protection from the sea unless the wind is coming directly from the direction of either the bay or cove. On the 3rd of April, winds of 70km per hour were coming straight onto the beach in front of the hut, combined with a particularly high tide, waves first of all destroyed a breakwater that had been built for such occasions and then reached Omond House, bringing great ice blocks with it, and carrying stores over the ridge. The men abandoned their shelter, collecting what they could, they went to the highest point on the beach but could not pitch tents because of the winds. Wet through in an air temperature of about -9.5C they sheltered in a smaller hut and waited for the worst of the weather to be over, expecting to see their shelter destroyed.

Some hours later they surveyed the damage, not as bad as they feared, and set about making repairs. The rest of the winter was passed uneventfully, though the smaller number made the winter more socially difficult than the previous year. On the 31st of December, the Argentinian naval ship Uruguay relieved them, the same ship that had rescued Nordenskjold's crew just two months earlier. A fresh crew of Argentinians were left behind to over winter taking meteorological observations along with plentiful supplies, the base was renamed "Orcadas" and has been in continuous occupation by the Argentinians ever since, the longest continually manned base in Antarctica.

Laurie Island map 1903, the spit of land where Omond House and the current Orcadas Base are can be seen to the left between Uruguay Cove and Scotia Bay

Orcadas in the 1970s looking out into Scotia Bay, note the low elevation of the land on which the base is built, between Uruguay Cove and Scotia Bay
picture: Jorge Giammatteo, used under CC3 Attribution Share Alike Unported licence

Bruce was given a gold medal from the Royal Scottish Geographical Society, the Scotia Arc, Scotia Sea and Scotia Ridge were named in honour of the expedition and Bruce established the Scottish Oceanographical Laboratory in Edinburgh with the £5,000 he got from the sale of the Scotia, he died in 1921.

More pictures of the expedition from the Scottish National Archive 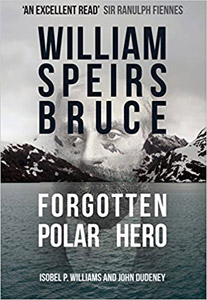