Photographer Australasian Antarctic Expedition - 1911-13
Photographer Endurance - 1914-17 - 29 at the start of the expedition.

Single, was of Sydney, New South Wales. He had been the recipient of many amateur and professional awards for photographic work before joining the Expedition. At the Main Base he obtained excellent photographic and cinematographic records and was one of the three members of the Southern Sledging Party. He was also present on the final cruise of the `Aurora'.
From Appendix 1, Mawson - Heart of the Antarctic.

Frank Hurley with a cinematograph, an early movie camera, on South Georgia

Frank Hurley under the bow of the Endurance in 1915

The only member of Shackleton's expedition that Shackleton didn't meet or interview before the expedition set off, Hurley was accepted on the the strength of his work with Mawson on the 1911-13 Australasian Antarctic Expedition.

Hurley joined Shackleton's Endurance expedition at six weeks notice meeting the ship in Buenos Aires after travelling from Australia. He had been warned by Mawson to make an arrangement with Shackleton whereby he was paid a percentage of the profits of the expedition. It was in Shackleton's financial interests to make sure that a full pictorial record of the expedition made it back home.

Hurley was tall and tough, his first impressions of the crew of the Endurance were not favourable thinking that their physiques were small and not up to standard of the men on Mawson's Australian Antarctic Expedition.

Nonetheless, he was as Greenstreet put it "a warrior with his camera & would go anywhere or do anything to get a picture". At that time a camera was a large wooden boxed structure weighing many pounds and requiring more wooden boxes of glass plates that were used to take the negatives. Even taking the simplest photograph was a significant undertaking and Hurley regularly hauled his equipment, 40 lbs of it and more to difficult places, to the top of the Endurance's masts or up peaks in South Georgia for instance.

He was also a skilled tinsmith and made a water pump for the lifeboats and also a portable stove taken around from camp to camp from materials salvaged from the Endurance, both difficult jobs due to the lack of correct and sharp tools for the jobs.

Even though many photographic plates taken on the Endurance expedition were destroyed before taking to the lifeboats, many survived along with a good deal of cine film which provide the pictorial record of the story. Hurley rescued many of the plates after the Endurance had been lost, but still not fully submerged by returning to the wreck and bare-chested to the waist dived into 3 feet of mushy ice and sea-water to retrieve cases of glass negative plates that were protected by being zinc lined and soldered shut.

Hurley sat with Shackleton on the ice at Shackleton's insistence and they decided between them which plates to keep and which to leave to conserve weight. Those to be left were broken so second thoughts were not an option. 150 of the best plates were saved and the remainder, about 400 were destroyed.

Hurley was nicknamed "The Prince" on the expedition for his susceptibility to flattery, a trait which Shackleton had reason to use as a means to keeping Hurley onside during the most difficult times and to temper Hurley's sometimes overly forthright and uninhibited manner.

He continued to be critical about his fellow crew members on arrival at Elephant Island, recording in his diary that

"... many conducted themselves in a manner unworthy of Gentleman and British sailors. Some of whom it was anticipated would be the bulwarks of the party "stove in". In the majority of cases those suffering from severe frostbites could be traced to negligence..."

"Amongst those that stand meritorious, Sir E. has mentioned: Wild - a tower of strength who appeared as well as ever after 32 hours at the tiller in frozen clothes, Crean who ... piloted the Wills, McNiesh (Carpenter) Vincent (AB) McCarthy (AB) Marston (Dudley Docker) & self"

Note that he included himself without comment. He went on to say that:

"A fair proportion of the remainder. I am convinced would starve or freeze if left to their own resources on this island"

Hurley had total admiration for Shackleton's leadership under these circumstances with what he saw was less than ideal material.

After the rescue and return home of the expedition members, Hurley returned to South Georgia, to shoot more footage for his film of the expedition. He attempted to follow in the footsteps of Shackleton, Crean and Worsley across the island, but despite it being summer and having proper equipment, he found it impossible to do so.

It is largely due to Hurley's pictures that we are able to get such a good impression of the events and that the Endurance story is still very alive and capturing people's imaginations even today.

Hurley left school and home at the age of 13, without any qualifications and worked in a steel mill and the Sydney dockyards. Eventually he studied at the University of Sydney and taught himself photography.

He was the official photographer on Douglas Mawson's 1911-1914 Australasian Antarctic Expedition and also on Ernest Shackleton's 1914-1917 British Trans-Antarctica Expedition, he spent over four years in Antratica.

After the Endurance expedition, Hurley served as an army photographer in the First World War.

Later he became the official photographer to a number of expeditions to tropical regions, returning to the Antarctic again in 1929-1931 on the BANZARE voyage (British, Australian and New Zealand Antarctic Research Expedition).

He was a war photographer again in World War Two. 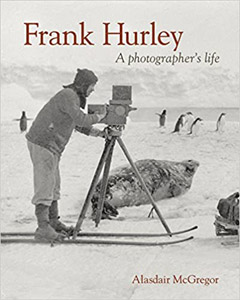