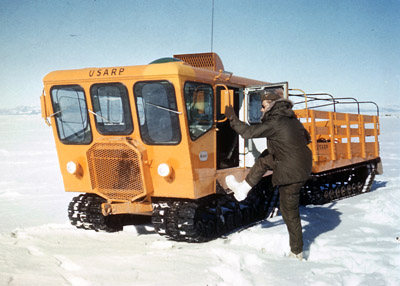 McMurdo 1961 - One of the scientists heading out

Bill Bertrand (MCB6 and CBU201 1965-1966) - Harwich port , Ma  I worked on the water lines going and from the nuke plant , also worked in the nuke plant installing new boiler for water treatment plant. Turn on desalination unit and tested fresh water by drinking some, was pretty good (we thought).

Morton O Childress Jr...(Marty Childress) (McMurdo - winter over 1969, 1970) - Louisville Kentucky email  Dental tech -  tipsy pin setter (bowling) - WASA dj - near death 6 months ago, BUT now looking forward to reunion in Nashville in 2021. (Little known fact: assisted in the recovery and identification of the bodies of the deadly helicopter crash near Mcmurdo. (so badly burned that they could only be positively IDed by their dental work), was the told cause of the crash...)

Earl Griffith - Griff (McMurdo, Beardmore, Hallett - 1970-1973) - Helena, Montana   I was assigned to the firehouse gang at McMurdo for a couple of months until I made grade to AG-3, then on to Beardmore Glacier to take weather obs. Finally got sent to Hallett in Jan 71 and spent the next two seasons there. We closed the station in Feb 73. Capt. Van Reeth allowed me to keep the last American flag that flew over the station while still an active US Navy base. The Ice was the best damn tour in the Navy. Good people, good friends.

Calvin Griswold (Griz) (1966-67, McMurdo Station/Yates Army Airfield Camp 1) - Ocala, Florida USA   Looking for friends working at that time that was in the Navy. I served as a mess cook at McMurdo from 1966-1967. I was with Antarctica Support Activities for the summer months. I few out of Davisville , Rhode Island to Christchurch, New Zealand. From there to Williams Air field to McMurdo Station. I had a list of the men that served with me but lost it during the years. Is there any way of finding out the names of the men who were stationed with me. I have pictures of them but can't remember their names. While there I also went on a 3 month expedition to Marie Byrd Land with a Army unit who few helicopters. It was called Yeats Army Airfield, Camp 1.

Robert Hankins - Hank (1962-63) - Belton Tex   W/O party Deep Freeze '63. Was an AG2 (weather guesser). POIC of Beardmore Sta. for 6 weeks prior to closing it down for the winter. Was held over a month in order to go back out and set up a new station. Old hut had sunk too far down in the glacier to be usable. Lots of memories (mostly good). Water supply had gotten contaminated just prior to our arrival, Rationing in effect. first shower on Xmas eve. To say McMurdo was aromatic was an understatement!

Howard Hanson - Hans (McMurdo and Hallett Stations, 1967-1969) - West Springfield MA USA   I was an ET at McMurdo and then the station ET at Hallett for two summers.

Donald E Heibel - Don (NAF McMurdo Wintered Over 1960, October 1959 left Oct 1960) - Charleston SC   Air Traffic Control at Williams Field, next to the ice runway. Performed Air Traffic (AC-3) Services with a mini control tower and radar. Made GCA approaches during white outs. Wintertime was assigned in town to the Dog Sled Team.  Stormy, a malamute, was my companion and helper. We checked the fuel tank levels on the hill above camp. Drank with the Kiwis at Scott Base where my lead dog would get loose and fight with the Kiwis dogs at Scotts Base.

Russell Hinckley (McMurdo - 66, 67, 68) - Edmond OK, USA - Rank third class petty officer or iPo for short I enlisted during the the time when cooed come in with e 4 rank or the iPo ass the regular Seabees called us but after a time we all got along all the years were summer support got out June the 9 1968 back to Oklahoma and war weather.

I was a member of the 1968-1969 Winters Over medical group that took care of the military and civilians at McMurdo Station. I was the X-ray technician, Jack Moore was also a medical technician, also Eastwood and Minogue were hospital corpsman. Our physician was Dr. Roger Case from Whitby island, Washington . I roomed with the ship store clerk "swamp rat" from Georgia. We had a very good year on the ice and I guess we're the last personnel to live in the old Quonset huts, we're you could keep you beer cold under your bunk on the floor, but you had to check it to see if your beer had goober in it (frozen beer). I have quite a lot of pictures from the tour at McMurdo, Willie field, Byrd station and also the south pole station were I visited during my tour at McMurdo. I also have photos of Christchurch, New Zealand before the earthquake destroyed a lot of beautiful sites. I do miss my time on the Ice and would like to hear from others during the 68-69 tour.

Larry O. Johnson,  RM2 (1961 - McMurdo, Little Rockford, Beardmore) - Beaverton -    I wintered over at the transmitter site on the hill. I spent 3 months at Little Rockford an 3 months at Beardmore Glacier. I was just a kid of 19. Great time and went from there to the submarine force. 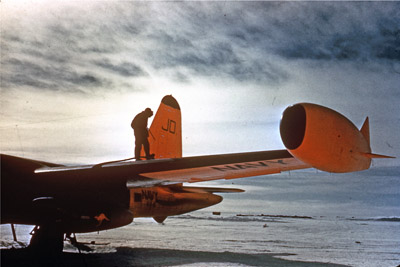 Larry Kaib (1965-1966) - Mckees Rocks, PA, 15136   Part of Winter-Over party on Deep Freeze 66. Started out running the electronics warehouse then moved over to run the automotive parts warehouse. Lots of fond memories from the Playboy Club next to Chapel Of The Snows. Lots of good friends from the supply corp of which I was a part. Also loved the following R&R in Christchurch. Wow, what a place. I'll remember the good times I had in the Deep Freeze tour and Christchurch forever.

Robert McNeish - NavNuPU PM3A* - (1967) - Summerville, SC, USA  What a change from when I arrived and to see the building that is being used today to house and feed the crew. What a Change!! - email available

* I was one of those guys up on the hill at the Nuclear Power Plant. I was not a Nuke, Just the unit supply man. The definition is Naval Nuclear Power Unit (PM-3A). The PM-3A was the letter designation assigned to that particular Unit. Also up on the hill in one of the buildings was the water distillation units. The second was installed during w/o 67-68. In the same building was two large water tanks, one full of salt water, the second full of fresh water that supplied down town.

Jim Moore (1968) - California    Field worker for NSF based at McMurdo. Came down with Dr. Robert Feeney from UC Davis.  Operated a fish house on the Ice Shelf.  Also worked with most other research teams, especially penguin and seal research groups

ET2 Frank Nadeau - (1962 -63 Winter Over) - Virginia, USA.  Wintered over 1962-63. Worked in the Comm Center halfway up the hill. Moved the Electronic spare parts from a snow bank outside the Comm Center down to the second deck of a newly constructed warehouse. New pictures don't allow one to figure out where the old buildings were. PM3A provided power when it was up. We lived in T-5 huts where the guy on the bottom bunk slept in a down mummy bag and the guy in the top bunk just used a sheet.  - email available

Ed North (McMurdo, Willie Field, 1965-1966) - Wolcottville, US   Was in Sea Bees, worked with crash crew during summer at Willie Field. Moved into Mac Town during winter and worked at fire house.

Ken Osicki (Zorro) (BioLab McMurdo, DF 63 - Broadview Hts, OH  Winter over 62-63 as Manager BioLab and Asst. Station Scientific Leader. One of the "USARPS" housed next door to the chapel. 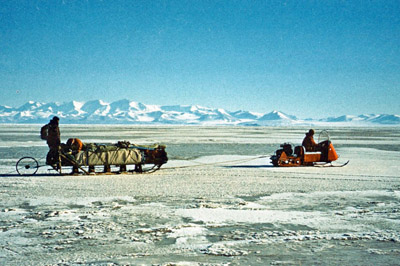 Charles Rhodes (US Air Force 1720 aerial support group - 62) - Lamesa, Texas   I was stationed in Christ Church new Zealand with the 2720 aerial support go on C124 globe master ,we would make drop pallets and delete to McMurdo Sound to unload oil in drums and put 4 on s psllettbyo drop st wake and other brafii sites and we stayed in Quonset huts

Mike "Rice-a-Roni" Rice RM2 (South Pole & McMurdo - 1969/1970) -  Carlsbad, California, U.S.A. Summered at South Pole Station, Wintered Over at McMurdo Station. Arrived McMurdo Sept. 1st, 1969 on VXE-6 Super Constellation "Pegasus", which crashed opening base the next year and is still down there. Departed Ice on 31 October, 1970. While at Pole was communicating with Max Conrad flying the "White Penguin" when he pancaked into the ice upon take off. His plane is still at the pole. Had Christmas dinner with Rep. Jerry L. PETTIS on Christmas day 1969 and made a phone patch to his wife. Jerry L. PETTIS Memorial V.A. Hospital in Loma Linda CA is named after him. That's where I go for treatment for cancer from exposure to Agent Orange in Vietnam in the 60's. Would like to hear from any other Winter Over 70 guys or ANYBODY who has endured the Long Antarctic Winter.

James P Smith (McMurdo - 1967, 68, 69, 70, 71) - Wallkill email  My DAD was there, they called him SMITTY. I have lots of pictures of the ice. He worked with the Seabees. There was a bowling alley. He did a lot of Artwork for CHRISTMAS and such. Cut out of plywood and painted The NATIVITY. Any info would be great.

John Svensson (McMurdo, Deep Freeze 1963-1964) - Kalama, Washington  As I did Oceanographic work in the Arctic 600 miles north of Pt. Barrow, Alaska.  I am listed as one of the last 100 living Arctic explorers by Ohio State.

James M. Takos (McMurdo, September 1969 to January 1970) - Mission Viejo California USA email  Looking for others who were there.

Ron Tisue (McMurdo Mile 160 - 1957-59) - Cincinnati, Ohio  Naval Weather service. Spent 18 days at Mile 160 to set up weather station with equipment from Little America . not exactly successful!. have many Photo/slides from the experience ! would like to hear from anyone there at the time.

Clinton "Gene" Van Horn (1967-1968 winter over) - Walker, IA  I was an RM2 with the winter over crew of 67-68. If any of the crew from that year would be interested in communicating, I would enjoy the connection.

Silas Willie Williams (MCB 6 NCEL Base, ASA McMurdo wo party ASA  Byrd Station Wo Party - 1964, 1966, 1969) - Ciniguita Honduras  email I got tired of the cold and retired in Central America on the beach.  Would like to hear fro anyone who was stationed at any of the bases or units I was attached to.

I am looking for anyone who might have known my cousin William (Bill) White, Operation Deep Freeze Year/s 1960ish. I have a Christmas card he sent from Antarctica to my parents during the 60's. He was KIA Vietnam June 1969. Margaret-Mary Morgan, Seattle email Mar '21