Once wedded to Nature there is no divorce - separate her you may and hide yourself amongst the flesh-pots of London, but the wild will keep calling and calling forever in your ears. You cannot escape the "little voices".
- Frank Wild

John Robert Francis Wild, better known as Frank Wild is the relatively unknown giant of the "Heroic Age" of Antarctic Exploration. He played a significant role in several of the most important expeditions, being on board when the Discovery  sailed for McMurdo Sound in 1901 so heralding the start of 20 years of epic exploration and adventure, he was on board the Quest in 1922 when the death of Shackleton at South Georgia signified the end of the era. No one else was so involved and no other explorer spent so long in Antarctica. He is one of only two men to have been awarded four Polar Medal each with silver clasps.

He is frequently referred to as Shackleton's "right hand man" or the "loyal lieutenant" though he was much more than this.

In 1901, he volunteered to join Scott's "British national Antarctic Expedition" 1901-04 on board the Discovery, being involved in the sledging programme.

On the Aurora with the Mawson expedition

Ernest Shackleton, left and Frank Wild, right camping on the sea ice after the sinking of the Endurance

Frank Wild on the Aurora with the Mawson expedition

Frank Wild in his bunk at The Grottoes, Aurora expedition

Watson, Wild and Dovers at the Grottoes, Aurora expedition

Wild and Kennedy setting out to relieve Jones' Party

His start as an Antarctic hero was less than auspicious, Douglas Mawson describes the first time he met Wild in New Zealand on the Nimrod expedition as being when Wild was being carried out of a hotel while drunk.

On the Nimrod expedition 1907-09 led by Shackleton, he was chosen as one of the men who would manhaul up the Beardmore glacier to the South Pole, coming within 97 miles of the goal. Discretion became the better part of valour on this occasion and the party turned back at a point where they thought they could return still alive, rather than pressing on to the pole, when they were unlikely to make it back safely to McMurdo Sound and their base.

In 1911, he joined Douglas Mawson's  two year long "Australian Antarctic Expedition" as a sledging expert and was in command of the Western Base experiencing very difficult snow and sledging conditions.

Single, Leader of the Western Base Party (Queen Mary Land). He joined the Merchant Service in 1889 and the Navy in 1900, served on an extended sledge journey during the National Antarctic Expedition (Capt. R. F. Scott) of 1901-1904, and was one of the Southern Party of Sir Ernest Shackleton's Expedition from 1907-1909. During the Australasian Expedition he opened up a new tract of country - Queen Mary Land.
From Appendix 1, Mawson - Heart of the Antarctic

Shackleton selected him again for the 1914-17 "Imperial Trans-Antarctic Expedition" when he was second in command to Shackleton himself. His sure handling and steady support proved invaluable when the expedition ship, the Endurance  sank in mid-ocean and the party had to make it across initially solid, but increasingly broken-up sea-ice to Elephant Island. Wild remained on Elephant Island for nearly 4 months with the majority of the crew appointed leader by Shackleton who set off with a small party to fetch help.

He returned to England in early 1917 and volunteered for service in World War 1 where he was posted to Archangel in far north Arctic Russia.

Frank Wild, night shift in the "Grottoes" on the Mawson expedition

With the wreck of the Endurance after she was crushed by ice and before the remains slipped beneath the sea and ice.

Frank Wild, left on the Nimrod after the farthest south at the time of 97 miles from the South Pole.

After the war, he went to South Africa where he farmed with Francis Bickerton (ex. Mawson expedition) and Dr. James McIlroy (also ex-Endurance) They farmed in British Nyasaland in the neighbourhood of Lake Nyasa (South Africa) between the end of the First World War and Wild and McIlroy leaving to join the "Quest" expedition in 1921. They cleared the then virgin forest and planted cotton. They loved the life though suffering intermittently from bouts of malaria. According to Frank Wild, in a letter written in 1920 to his cousin Margaret, they "would have been there still if Shackleton had not called for us to come on this expedition". They had the full intention to return to their farm in Africa after the expedition; whether they did or not, I do not know.

Shackleton once again requested him to take part in the 1921-1922 Shackleton-Rowett expedition on the Quest which was cut short due to Shackleton's death from a heart attack on South Georgia before the expedition had reached Antarctica proper. Wild took over as leader and brought the adventure to a conclusion after a brief trip from South Georgia to Antarctica.

Frank Wild was born in Skelton, Yorkshire, the eldest of 8 sons in a family that also had 3 daughters, his father was a school teacher. His mother was a direct descendent of Captain James Cook. At the age of 16 in 1889, he joined the merchant navy, transferring to the Royal Navy in 1900.

He was the recipient of a number of awards for his contributions to exploration and advancing geography, in 1923, he was made a Freeman of the City of London. In June 1923 he returned to South Africa, to continue to farm though was unsuccessful due to a prolonged drought. His savings gone, he took work in a bar and in a mine to support himself and his wife, over the next few years he tried his hand at various ventures falling into financial difficulties. He was a popular character where he worked and was by no means unique in experiencing difficulties at this time which was the depression years of the late 20's and early 30's. He seems to have had some difficulties with alcohol, the severity of which is unclear and depends on the source of the information, at any rate, there is always some mention of his being a drinker.

Frank Wild died on the 19th of August 1939 in Klerksdorp, South Africa where he was employed as a store man at the Bobrasco Mine, of pneumonia and diabetes. He was cremated on the 23rd of August 1939 in the Braamfontein Cemetery in Johannesburg*

Wild's ashes were found still in the church in Braamfontein Cemetery in 2011 where they had lain for 72 years. His widow had intended them to be taken to South Georgia to be laid alongside Shackleton's grave, though war broke out a week after her husbands death and then with her passing and no there being children, the ashes were forgotten. Later in 2011 his ashes were taken to South Georgia and laid alongside "The Boss", Ernest Shackleton in a ceremony witnessed by descendants of both Wild and Shackleton.

*Frank Wild is widely reported as dying in Johannesburg, SA. I am indebted to Angie Butler (author of biography "The Quest for Frank Wild") and Luigi Casaleggio for correcting this error after much research.

Feature Name: Mount Wild
Feature Type: summit
Elevation: 945
Latitude: 64°12'S
Longitude: 058°53'W
Description:  Sharply defined rock ridge with several summits, the highest 945 m, standing at the N side of the mouth of a glacier on the E coast of Trinity Peninsula. First charted by the FIDS in 1945.

Feature Name: Cape Wild
Feature Type: cape
Latitude: 68°23'S
Longitude: 149°07'E
Description:  A prominent rock cape on the eastern end of the Organ Pipe Cliffs. This may be the cape viewed from the ship superior mirage, by the USEE under Lt. Charles Wilkes, Jan. 19, 1840. Wilkes applied the name "Point Emmons" for Lt. George F. Emmons of the Vincennes. The cape was accurately positioned by the AAE (1911-14) under Douglas Mawson. 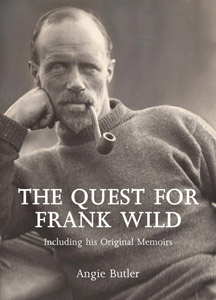 The Quest for
Frank Wild
biography by
Angie Butler