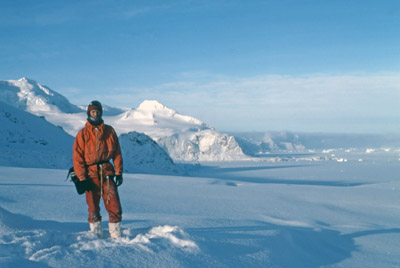 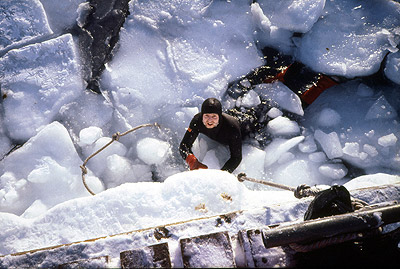 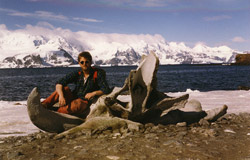 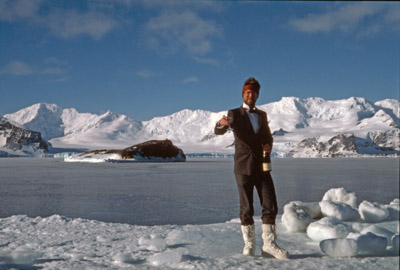 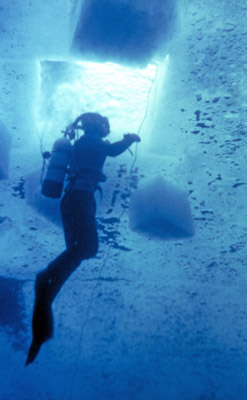 At the age of about 14 I was at home on a school day with a real or imagined illness and while laying there suffering (it's hard when you're 14 and a bit poorly) there came a film on the tv "Mr. Forbush and the Penguins" * (Cry of the Penguins in the USA). This was a film about a young man who went to Antarctica to study penguins (starring John Hurt) and it planted a seed.

At the age of about 17 I was in the college careers library with little to do (or at least little that I wanted to do), so I started looking through what was there and came across some information on working in Antarctica. This struck me as an exciting and worthwhile thing to do, so I resigned myself to the rest of the day spent on the humdrum and stored it away for some years. The seed had germinated.

A degree in Zoology later and a desire to use this to do something I might never be able to do again met with my love of nature and wild places and the memory of what a great place Antarctica might be to go to led me to start looking through the job section in New Scientist magazine. Like many people I know who eventually went South, I wasn't successful the first time, but I got the second job I went for - I was to be a marine biologist on the British Antarctic Survey base on Signy Island in the South Orkneys (in retrospect far more appropriate than the first job I went for).

I spent just over 2 years in Antarctica from 1985 to 1987 doing this job, in particular focusing on the metabolism and muscle of Notothenia neglecta, an Antarctic fish. This was when I took the photographs in this web-site and developed a deep admiration for Antarctica and a love of its wildlife (I suspected I might before I went!).

On return to the UK I became a teacher and after giving many illustrated talks to pupils and seeing what else was available on the web about Antarctica decided to put what I had together into a web site (about 14 years after I returned - when the internet had been invented), and so here it is.

I hope you enjoy this site and its pictures.

Since this site started it has snowballed (pun intended) into an ever expanding hobby/facility/job in directions that I never thought it would. I did think that after about 3 years of part-time work this site would be "finished", now over 20 years later my to-do list is bigger than it ever was and from where I am at the moment there will be no end, as the longer I go on, the bigger the plans get.

Cool Antarctica has now had many tens of millions of visitors, a truly astonishing number to me for my hobby-site and show-case for my pictures that I took. I am so glad now that photography and making the most of the Antarctic Experience are what guided me while South rather than only focusing on the intricacies of the muscle metabolism of Notothenia neglecta.

I find myself in a position where I can relate my own Antarctic experiences and act as a hub for other people to send me their own pictures and information to further promote the status of Antarctica a wonderful and unique part of our planet. I can't think of another website I'd rather be responsible for.

Who is danthewhaler? I use this as my email address. The Island I was stationed on in Antarctica (Signy) was the site of an old Norwegian whaling station that was active in the 1910's and 1920's. About half a mile as the skua flies from the base is a small graveyard containing the graves of five whalers who died while in Antarctica.

The story was that the ghost of one of these whalers, Dan, haunted the base and in particular Tonsberg house, the oldest building on the base. This building took the form of a long hut with a central corridor with rooms coming off it on each side, there was a fire door half way along (that I always called the Dostoyevsky - Fyodor, night-watch was long and boring) . We took it in turns to spend a week on night-watch and people would tell of how as they did a round of the base, the far half of Tonsberg was prone to "noises", chairs scraping and moving, doors opening or closing as the ghost of Dan the Whaler did his rounds alongside you.

It was the oldest building we had and was wooden so it creaked and groaned especially in a storm and especially when you were alone in the middle of the night. Nothing spooky actually happened during my rounds but I certainly didn't hang to find out.

* Mr. Forbush and the Penguins / Cry of the Penguins - I've seen it again a while ago, it's not very good really, some things are best left as memories rather than being revisited.

CoolAntarctica.com is a participant in the Amazon Services LLC Associates Program, an affiliate advertising program designed to provide a means for sites to earn advertising fees by advertising and linking to Amazon.com and Amazon.co.uk.