Born in Bredon's Norton near Tewkesbury, England the son of a grammar school headmaster, Priestley studied Geology at Bristol University.

He joined Shackleton's Antarctic Nimrod Expedition (1907-09) at the end of his second year studying geology at university, he worked closely with renowned geologists, Philip Brocklehurst and and Edgeworth David. He collected mineral and biological samples and was part of supply depot laying teams for Shackleton's attempt on the South Pole in 1909. In November 1908 he spent three days in a blizzard sleeping outside the tents in his sleeping bag due to a lack of space inside. As the blizzard progressed, he gradually slipped down the glacier they were on nearly falling off the end to his death.

Priestley was recruited by Scott for the Terra Nova expedition when the ship called at Sydney on the way south where he was working on the geology report for the Nimrod expedition.

He was part of what was intended to be an Eastern Party of 6 men led by Campbell to carry out scientific work, but failing to find a landing site, they returned westward again coincidentally meeting Roald Amundsen on the Fram in the Bay of Whales. Unable to find a suitable eastern landing, Campbell's party became the Northern Party, building a hut and wintering at Cape Adare in 1911, he was the only civilian member of this group, the others being naval men.

Priestley, Levick and Browning after thier winter in an ice cave on Inexpressible Island

l to r, Priestley, Abbott, Campbell looking for geological specimens in better times, probably in the vicinity of Cape Adare

The following summer in January 1912, they were transferred 250 miles south by the Terra Nova to Evans Cove (closer to the expedition base hut) with enough sledging rations for six weeks and two weeks provisions for six men with the intention of staying two weeks before being picked up again. Heavy sea ice conditions meant that the ship could not reach them and they had to over-winter again. Unprepared and woefully under resourced, their tents having been damaged by a gale, the team dug an ice cave on a place they later called Inexpressible Island and a miserable winter ensued, rations were extended with the occasional seal or penguin that could be killed. They left at the end of winter on the 30th of September 1912, walking towards Cape Evans, crossing 200 miles of sea ice to arrive on the 7th of November when they were informed of the deaths of Scott and the South Polar party.

Priestly served in WW1 with distinction being awarded the Military Cross, he remained in the army until 1920. In the same year he was awarded a BA at Cambridge for his research work and writings on glaciers, 15 years after beginning to study for a degree at Bristol!. Also in 1920, he co-founded the Scott Polar Research Institute in Cambridge with fellow Terra Nova expedition member Frank Debenham. Priestley had a long administrative university career holding many academic and government posts in Australia and England. He was Vice-Chancellor of the University of Melbourne, later the Vice-Chancellor of the University of Birmingham (1938-52) he was knighted in 1949.

Despite retiring in 1952, he served variously as Chairman of the Royal Commission on the Civil Service, deputy Director of the Falkland Islands Dependencies Survey (which later became the British Antarctic Survey), and president of the British Association for the Advancement of Science (1956). He returned to Antarctica in 1956 and 1959. 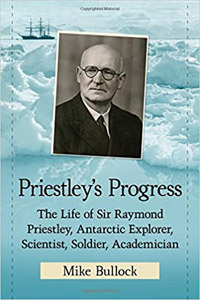