A great deal is known today about the requirements for survival in extreme conditions in terms of what food and clothing is required. Much of this knowledge was discovered the hard way, by men suffering from cold, starvation and deficiencies of vitamins while exploring Antarctica or the Arctic.

The early days of Polar Exploration were often as much of an investigation into what was required by the human body to keep it warm and well nourished in extreme circumstances as it was an investigation of the Polar environment itself.

A rich and varied menu is for people who have no work to do. - Roald Amundsen

A key lesson learned from polar exploration amongst other sources is that hunger and hypothermia are closely linked. Our bodies can only provide enough heat to keep us at our normal temperature as long as they are provided with enough food.

How much food and what sorts?

Two things were found out very early on in Antarctic exploration - that extreme cold makes people feel very hungry and hard work such as that involved in travelling by dog sledge, or especially by manhauling uses a great deal of energy. This energy had to be replaced by eating enough, unfortunately the early explorers didn't eat enough and suffered as a consequence.

We now know that the following Antarctic activities use per day for an adult male:

Travel by dog sled doesn't mean sitting on the sled and cracking the whip every now and then as is often thought. The dog driver will spend time running alongside in difficult conditions to lighten the load and will actively push the sledge from behind over very difficult terrain to aid the dogs. Travelling by dog sled is very active, a lot more so than travel by skidoo where the driver does just sit on the vehicle or sledge as a passenger, in that case the increase in food consumption is due to colder conditions and being somewhat more active than on a station inside buildings..

The food eaten on bases in Antarctica is very similar to the food that you will eat at home, of course, there are national differences in what is on the menu, but it will be basically what you are used to.

The biggest difference and deficiency is in the supply of fresh fruit and vegetables - i.e. there aren't any for much of the time, only when a ship comes in or an infrequent aircraft lands.

For much of the year the majority of food is either frozen, dried or tinned. It tends to arrive on base at the beginning of the summer season in a major shipment of a years worth of food. Each base of more than about 6 people will have a cook or several depending on the size whose job is to order and prepare all of the food consumed on base.

Modern techniques of food preservation and fortification with vitamins otherwise lost in the preservation process mean that there is no danger of suffering from a deficiency disease such as scurvy which sometimes happened to early explorers. You do get to accept that food can be fairly bland and not very exciting after a while, despite the best efforts of the cooks they can't replace the things you miss most.

The difference when some fresh vegetables arrive is incredible, you'd never believe that a humble boiled carrot or potato can be so delicious!

Some stations grow fresh vegetables on a hydroponic system where the plants grow in slowly circulating water with nutrients dissolved in it. The Antarctic treaty forbids the import of soil or similar materials to Antarctica because of the possibility of introducing non-native insects, fungi or bacteria. Despite very careful measures, sometimes an outbreak of non-native insects does occur that have been accidentally transported from outside Antarctica, and the hydroponic facility has to be shut down and all of the plants destroyed. 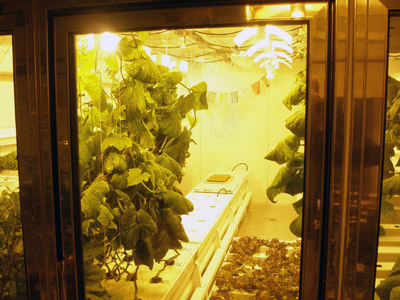 Out in the Field

"The field" is basically anywhere that isn't on a base and where you have to take your own food with you and prepare it in a tent or other shelter. Scientists and support staff may be in the field for a day or up to three months at a time with shorter trips being more frequent.

First thing - you'll need more food than you do on base. You're not being kept warm by the environment around you (the building) and you'll be doing more physical activity than on a base.

Second thing - you need to carry this larger quantity of food with you, and it takes up space and weight which are substantial even when you are have vehicles to transport it for you.

Food for the field is designed to be high energy for low bulk and weight. This means that the food tends to be fairly high fat (which has the highest amount of energy for a given weight) and dehydrated. Fresh water is one thing that is plentiful in Antarctica even if it does happen to be frozen. It is more efficient to take fuel to melt snow and ice than to have "wet" food which would freeze and need to be thawed out.

An embarrassing tale of Antarctic grub:

When I first arrived in Antarctica, I was surprised that whenever any one went out for a trip - a few hours or all day - they only ever took chocolate bars to eat. I was most unimpressed with how unhealthy this was, so when I went on my first trip I made some wholesome and nutritious sandwiches, tuna and mayonnaise on wholemeal bread - I remember it well.

Come lunch time, my companion got out a chocolate bar and proceeded to eat it, I got out my sandwiches and after 5 minutes of sucking on a frozen corner gave up and resorted to chocolate. Thankfully I wasn't laughed at too much, but I didn't bother with my healthier option again!

As used by field parties - these are much more sophisticated now than they used to be. They need to be light, compact, easy and quick to prepare (to save fuel) and well packed. Modern food is also dehydrated which means that it can be more varied than in the past. Freeze-drying means that the weight is much less and modern packaging is significantly lighter than the tins that used to be used.

The biscuits are plain energy rich and fairly strong so they don't crumble to dust while being transported.

One days rations from Scott's Expedition in 1912

A modern sledging box containing 20 man-days of food, 20 days food for one man or 10 for 2.
Despite attempts to introduce variety, much sledging food tastes quite similar, the cost is more than twice that of
feeding someone at the main base due to expensive dehydrated food and the careful packaging needed.
You have to try really hard not to eat all the best things straight away.

The food packed into the box. Inside the tent, the box acts as furniture of a sort, as a table to cook and eat on.

More about food in Antarctica