The beginnings of McMurdo in 1955
picture US Navy / NSF

John C.Burritt (1958-59) - Fleming Is. FL   I was a Navy helicopter pilot on the USCSC Northwind for Deep Freeze IV in 1958 - 1959. We departed Port Lyttleton, NZ for McMurdo, escorting and cutting channels in the ice for supply ships going to McMurdo. One of the most interesting helo trips was taking Sir Raymond Priestley out to Hut Point to see Shackleton's and Scott's huts. We were able to go into Shackleton's hut. It was like going into a shrine. No one touched anything, we just left our name, outfit, and date on a piece of paper stuck on the wall. We were enthralled with Shackleton's stories of how it had taken him a week dogsleding to get to the hut. He was enthralled with the fact that we covered the same ground by air in about 20 minutes."

Campbell UD2 (Cape  Adare - 1957/58) - Pa  Looking  for men servicing during  DeepFreeze Operation II. I was stationed at Cape Adare and was on the ship Arneb when it was caught in the ice.

Roy Cloutier (Operation Deep Freeze Year/s 1961-1962) - Upstate New York  Wintered over McMurdo Sound. Was in 1st class hut near the Chapel. Was then transferred to RM Advanced School in Bainbridge Maryland. Worked at the Radio center up the hill below the transmitter location. I just watched a new movie out about Antarctica. Could not believe the buildings and McMurdo Station?  What happened to the Quonset Huts we lived in? It sure brought back many memories..

Bill Fisher - McMurdo (1957-58) - Kalamazoo, Mi    A great year to winter over. I was US Navy Radioman. Vivian (Bunny) Fuchs was knighted for his Antarctic crossing and I believe Sir Edmund Hillary presented Her Majesty's knighthood to him (flew in from Christchurch, did not winter over. My big, big boss was USN Admiral Dufeck. Turned 21 yrs while there. I was responsible for "cutting" teletype tapes for transmission later. I sincerely apologize to Sir Vivian Fuchs and ADM Dufeck for any typo's.

Trevor Grice (OP deep freeze Christchurch - 1967 to 1987) - Christchurch TF 06 364311  Secured a deck mounted generator for the Glacier which enabled the ship to complete its mission, before it was razor blades. When they returned to Christchurch under the command of Capt. Dick Taylor we put up a sign on the wharf which stated 'Its not sinbad the sailor, it is Taylor the sailor" to their great joy, They were wonderful years and i have lots of memories of other incidents. Warmest. Trevor Grice

Bill Miles (1963) - Woods Cross Utah -   Operation Deep Freeze I believe He (Bill Miles, my half uncle) was with Admiral Byrd's second expedition to the South Pole.

Ron Tisue (1959) - Cincinnati, Ohio    Interested in finding others who were wintering over during Operation Deep Freeze IV. 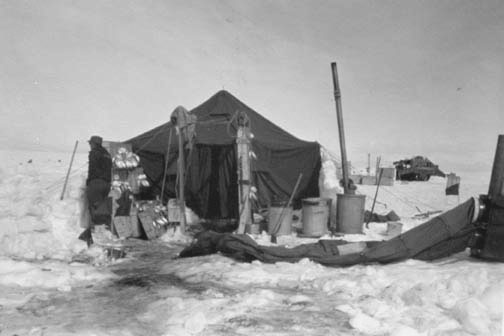 The kitchen "tent" at McMurdo in 1955 where the food was prepared for our crew that was constructing the base during Deep Freeze 1. Everyone ate outside sitting on crates etc. during the initial stages. I slept in a tent near to Scott's Hut Point building.
Picture courtesy Ken Meyer (PH1-USNavy 53-58 MSgt USAF Ret. 58-73

U.S. Coast Guard icebreaker "Eastwind". One of the icebreakers used by Operation Deep Freeze in 1955-56
Photo US Navy - NSF

Two U.S. Navy Yard Oiler Ships (YOG) frozen into the annual sea-ice at McMurdo in 1957. These were used as fuel storage facilities while the base was being built
Photo - Commander Jim Waldron USNR (Retired) - NSF 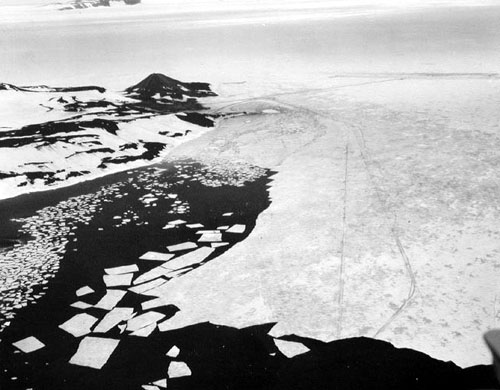 Aerial view looking Southerly toward McMurdo Base that was being constructed at the base of Mt. Discovery during Deep Freeze 1 about Dec. 1955 . The faint dark triangle from the ice edge is the two tractor trails that led from the cargo ships to the base. The air strip runway is to far right near top of picture.
Picture courtesy Ken Meyer (PH1-USNavy 53-58 MSgt USAF Ret. 58-73

McMurdo in 1960, note the oiler ships frozen in either side of Hut Point, top left. - picture Bruce Raymond / NSF

My father Clyde Willis was a CPO at Quonset Point, Pautuxet River, VX-6, 1957 1958.  He designed a jacket patch for the squadron when I was there in 6th grade.  Anybody have a picture? Clyde Willis Jr. Lake City.  Oct '19