Deception Island is a collapsed (but still active) volcanic cone. There is a 12km wide natural harbour, one of the safest in the world protected by high cliffs and a narrow entrance, Neptune's Bellows. It was first used by sealers as a base for operations and then later by whalers.

Deception Island was first visited in 1820 by sealers and was named by the American sealer Nathaniel Palmer. What first appears to be a normal island when approached by sea is deceptive once Neptune's Bellows are discovered so revealing it to be a flooded volcanic caldera, a collapsed cone.

Whalers Bay looking out to Neptune's Bellows, the only entrance to the natural harbour of Deception Island.

Chinstrap penguins porpoising in the sea off Deception Island.

There are now two summer-only research stations on the island, one Spanish and one Argentine. The island receives many visits from tourist ships in the summer months who come to see the large chinstrap penguin breeding colony (100,000 pairs) and to bathe in the thermally heated waters in certain places. The landscape of Deception Island is unusal for the Antarctic, while about 50% is covered in glaciers, the rest is free of snow and ice in the summer with terrain made of dark volcanic rocks. It has more rare plant species than any other place in the Antarctic.

Whalers cemetary at Whalers Cove, the largest cemetary in Antarctica. 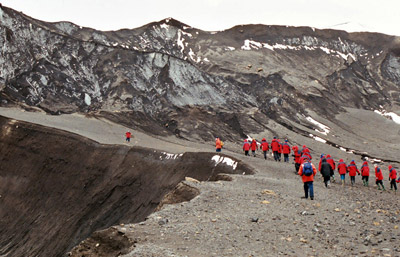 Abandoned British scientific base hut, occupied from 1944-1967 when a volcanic eruption forced a withdrawal, it was reoccupied for another 3 months from Dec 1968 until further volcanic activity lead to its complete abandonment. 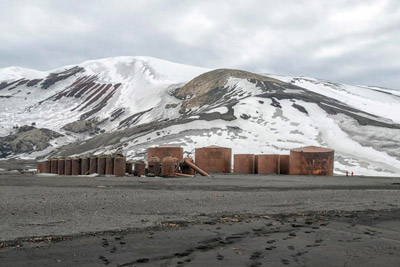 The remnants of Hektor Whaling Station active from 1912 to 1931.

Tourists bathing in volcanically heated water at Deception Island. The last confirmed eruption took place in 1970, further eruptions are expected though are notoriously unpredictable, the two eruptions in the 1960's took everyone by surprise, not least the scientists at the British and Chilean stations at the time who had their huts partially destroyed and were rather keen on being rescued!

In the 1920-21 summer, whaling boats at anchor in the harbour had their hulls stripped bare of paint when the water boiled,

License terms and conditions - Data is licensed according to Creative Commons CC-BY - data is free to use, modify and redistribute provided the source "SCAR Antarctic Digital Database" is acknowledged, and that the disclaimer below is accepted.

Disclaimer - Information in the Antarctic Digital Database has been obtained from sources believed to be reliable but its accuracy and completeness, and the validity of the opinions based thereon, are not guaranteed. As every effort has been made to provide accurate information in this database, SCAR would appreciate it if users could indicate in writing any errors that may be noticed. SCAR is not inviting reliance on these data, and the user should always check original published data. The information in this database is subject to change. Questions about the data should be addressed to Adrian Fox