A Scot, born in Greenock, Bowers father died when he was three, his mother then moved the family to London. He became a sea cadet and joined the navy serving in India before being recommended to Scott by Sir Clements Markham being appointed without an interview.

His role was originally that of storekeeper on the ship, but he soon proved he was capable of far more than this, he accompanied Cherry-Garrard and Wilson in their trip to Cape Crozier to retrieve an emperor penguin egg, famously written about in Cherry-Garrards book "The Worst Journey in the World".

Bowers was involved with depot laying in January-March 1911 as preparation for the south pole attempt later in the year. Starting in November 1911 he accompanied Scott's Polar Party by leading a pony called Victor pulling a sledge. When they set off, Bowers was one of the men who was to aid with supporting the South Pole attempt though not a part of the final party. Scott included him at the last minute when the last members of the support team turned back making him the 5th member of what had been planned logistically as a 4 man group, while the others had skis to stop them sinking in soft snow, Bowers didn't and had to walk. While he reached the South Pole, he died on the way back  with Scott and Wilson in their tent, he was 29 years of age.

"Wilson and Bowers were found in the attitude of sleep, their sleeping-bags closed over their heads as they would naturally close them."

Known as "Birdie" for his distinctively shaped nose, he was a powerfully built man, just 5 feet 4 inches tall (1.63m), popular with his companions as hard working, endlessly cheerful, dependable and tough. He was a figure of some fascination for the other men by his habit of stripping naked outside every morning once they had arrived in the Antarctic, and throwing buckets of icy water and slush over himself to acclimatize himself for what was to come.

"The hardest traveller that ever undertook a Polar journey as well as one of the most undaunted."
Scott

"There was nothing subtle about him. He was transparently simple, straightforward, and unselfish"
Cherry-Garrard

The Cape Crozier party
l to r: Bowers, Henry Robertson, Wilson, Edward Adrian, Cherry-Garrard, Apsley. This journey was what Cherry-Garrard would later write about in his book "The Worst Journey in the World".

Bowers with the pony Victor, October 1911

References to Henry Bowers by Scott  in "Scott's Last Expedition"

Feature Name: Bowers Mountains
Type: Summit
Latitude: 71°10'00S
Longitude: 163°15'00E
Description: A group of north-south trending mountains, about 90 mi long and 35 mi wide, bounded by the coast on the north and by the Rennick, Canham, Black and Lillie Glaciers in other quadrants. The seaward end was first sighted in February 1911 from the Terra Nova, under Lieutenant Harry L.L. Pennell, Royal Navy (RN), and subsequently named "Bowers Hills." The feature was photographed from U.S. Navy aircraft in 1946-47 and 1960-62, and was surveyed and mapped by U.S. Geological Survey (USGS) in 1962-63. The name was amended to Bowers Mountains upon U.S. Geological Survey (USGS) mapping which showed the group to be a major one with peaks rising to nearly 2,600 meters.


Other Crew of the Terra Nova Expedition 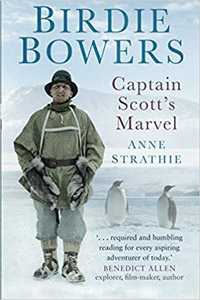