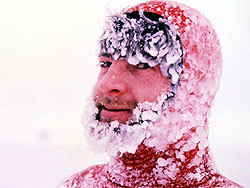 Cold Acclimation and Acclimatization in Humans - Science of the Cold

How can you acclimatize yourself to cold temperatures? Is it possible for everyone? How do you go about it?

Please note that I am not a doctor and despite this being written down and on the internet, it is probably not universally true. So if you do something extreme to harden yourself up and send me an email complaining of how dead you are as a result I'm afraid I won't be able to help any further.

We all have ideas of what a comfortable temperature is which may or not be an agreeable fit with the ambient temperatures that we are exposed to. We all know people who on the face of it aren't particularly different to ourselves who are much more or less able to tolerate cold or hot temperatures, that friend or relation who is always wrapped up and still shivering. It would be very useful if we could influence how we perceive the ambient temperature that we find ourselves in.

The ability to withstand cold is less to do with fundamental physiological differences in generating heat and maintaining body temperature than it is to do with how we perceive the temperatures to which we are exposed. Just because someone feels incredibly cold, it doesn't mean that they are actually any colder than someone else who is quite comfortable at the same temperature. Their body core and extremity temperatures will likely be very similar.

The evidence for acclimatization in man is much less than in other animals as we take our microclimate with us in the form of clothing and housing or other shelter.

The good news about this is that it is possible for most people to alter their perception of their temperature which is going to be easier than making any far reaching metabolic changes.

You can get used to the cold and not feel so uncomfortable with it.

The bad news is that this process of acclimation can be quite uncomfortable and does need a kind of will-power that may be the weakest in people who really do like to feel nice and toasty at all times (though of course in other directions, they may well be capable of feats of perseverance that cold-lovers cannot manage).

So how do I acclimate to the cold?

By exposing yourself to cold, there are many examples of how this happens, here are a few:

A consistent, reversible increase in BMR (Basal Metabolic Rate - the sum total of all our metabolic processes when the body is fully at rest) by approximately 30% in winter occurs in Korean women pearl divers (called amas) who dive throughout the year. Such a considerable enhancement of BMR in winter, when the seawater is at its lowest (around 10°C), is primarily a result of cold exposure.

The Korean amas are subjected to daily,  whole-body stress greater than any other group of human subjects studied (0°C air, 10°C water in winter). It should be emphasized that the amas dive throughout the year wearing only cotton bathing suits. They start diving at 12 years of age and continue until they are past 50. Because they are exposed repeatedly to severe cold over a long period, amas make a convincing example of acclimatization to cold, including the metabolic component of this process.

From: Life at the Extremes

"Birdie" (H.R.) Bowers who went with Scott on his expedition to the South Pole in 1911 was remarkable for his extreme hardiness, Scott described him as:

"The hardest traveller that ever undertook a Polar journey as well as one of the most undaunted."

"never seen anyone so unaffected by cold".

Bowers was able to sleep soundly in conditions where a companion described himself as being unable to sleep because of the cold causing extreme shivering fits.

Part of the reason for Bowers hardiness is attributable to a regime whereby every morning once they had arrived in the Antarctic, he would strip naked outside and throw buckets of icy water and slush over himself - much to the horror and fascination of his companions.

Example 3: Living in Antarctica for many months

This is where this page began, after being picked up by search engines I started to receive emails which led to my expanding on the subject.

I first arrived in Antarctica in February 1985. I had left England at the end of January when I suppose I was as cold adapted as happens on an annual basis for anyone living a fairly normal life in England. Antarctica on my arrival was colder even though it was midsummer there. I felt the cold and wrapped up against it, I then went through my first Antarctic winter.

Later that year in early November the first ship of the season arrived and we winterers were all outside excited to see some new people, get mail, news of home, fresh veg and other cargo etc. While we were wearing cotton t-shirts with our issued long overshirts with sleeves rolled up and untucked at the waist, we were surprised to see those coming off the boats in warm coats, fully done up and with hats and hoods on as well.

Though we hadn't thrown buckets of icy water over each other or rubbed ourselves with slush and snow, ours was a diving base and all of the base members had dived on a regular basis throughout the winter.

In addition to this we all had our own jobs that often involved getting very cold at some point, in my case it was while fishing in boats or by skidoo through ice. When I first arrived on base I hated getting fish out of nets as my hands and fingers hurt with the cold, flushing hot, then cold. I never came to actually enjoy this part of the job, but after about a month was able to put up with it and just get on. The heat coming from the wrapped exhaust of our small launch was used to restore dexterity when our fingers wouldn't move on command properly, but it never hurt again as it had done the first few weeks.Similar anecdotal and scientific studies show that occasional repeated exposure to cold will result in increased cold tolerance. Such acclimation usually takes the form of daily cold baths or showers that really don't even have to be all that cold (water is very good at carrying heat away from the skin) 15-20°C  / 60-68°F will do the job.

You do need to be a particular type of person though to have the will power to do this. When I became cold acclimated in the Antarctic it was in the process of doing things that were either a whole load of fun or a part of my job (that I liked) that I couldn't avoid. Being young and prepared to have a go at anything and everything probably helped too.

A few years ago when our water heating broke down at the weekend, I ended up having to have a cold shower after spending the day in the garden and getting sweaty and grubby, the shower really wasn't a lot of fun. However... I really did feel great afterwards to the point where I thought "I'm going to do this all the time!" - I didn't.

This is a good time for a serious health warning:
There have been many instances of people jumping into cold water, having a heart attack and dying.

Not as severe as this though still potentially very dangerous is cold incapacitation or cold water shock. This causes the body to rapidly direct peripheral blood flow to the core to retain heat. Cold muscles and nerves lead to a loss of coordination and strength in the limbs and fingers which can make it difficult to climb out of the water. The water doesn't need to be that cold and the person can be young and otherwise fit and healthy. Not everyone will react this way of course and you can minimize the hazard by entering the water slowly and in a controlled fashion. Here's a a sensible approach and advice.

If your body shape results in a high surface area to volume ratio, i.e. you are relatively slender for your height with long slim limbs, then you will lose heat more quickly than someone who is of a stouter build.

Birdie Bowers referred to above for instance was 5 feet 4 inches (163cm) tall and stoutly built which will have helped with his resistance to cold. Inuit and other polar and cold climate peoples are typically relatively short and stout while those who inhabit deserts and hot climates tend to be relatively slim and long limbed. If you have Inuit ancestry, you're laughing, if it's Masai, it's going to be more difficult.

Age has an influence too, as my wife occasionally reminds me that I'm not as young as I used to be in my Antarctic winter days and therefore feel the cold more than my sons. Elderly people may also be less likely to notice the effects of falling body temperature before it becomes a problem with slowed reaction times.

You won't be able to keep warm if you're not properly fed. Our bodys' know this, in fact they make this rule by making us hungry when cold to get more fuel coming in to be burnt to keep us warm.

By the same token, it is possible to lose weight by not wearing quite so many clothes in cold weather, yes you will feel cold and your body will make you hungry in order to eat, but if you can get through this and avoid eating more than normal, always being a bit cold is a good way to lose weight.

Explorers who attempt feats of extreme endurance in polar and mountainous regions will often calculate the work they have to do (in kilojoules or calories) and the food they need, they then balance this with the weight of carrying that food (and the fuel to heat/cook it). They can then build into their planning that they will lose weight during their feat, though ensure that they are not so badly affected that their performance drops too much. Unlike early polar explorers, these modern day counterparts can rely on a predictably quick return to the nutritionally enhanced and heated modern world without too much trouble.

One of the healthiest diets of all is the traditional high protein and high fat with little carbohydrate or plant food as eaten by groups of people who are the Arctic dwellers of various Inuit groups. This diet also supplies a daily intake of calories greater than that in more temperate climates. The key is that while high in fat, the fat is burnt off in keeping the body warm, it's the balance of food in and energy used that is important.

Ice diving and other extremes

This page would not be complete without mentioning the feats of Wim Hof, the "Ice Man" who is able to withstand temperatures that would probably kill other people by mentally resetting his internal thermostat to affect his body temperature. BBC clip