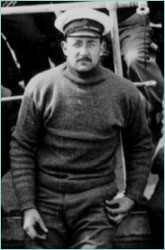 Macklin applied to join Shackleton's expedition shortly after finishing his studies, he didn't receive a reply and so travelled to London to see Shackleton directly at his office when he was interviewed and given a job.

One of two surgeons (doctors) on the expedition, Macklin also had the job of driving a team of sled dogs and caring for the expeditions dogs.

Most surgeons and doctors on Antarctic expeditions had little of a medical nature to deal with most of the time, but once on Elephant Island, Macklin and McIlroy, the other surgeon had much to attend to. Rickinson had a heart condition, Blackborow had gangrene in his toes several of which were amputated, Hudson was having a  nervous breakdown and suffered an infected boil, Kerr had a tooth removed without anaesthetic.. There were many other cases of frostbite, dysentery, boils, sores etc. that meant that both surgeons were best left on Elephant Island rather than accompanying Shackleton to South Georgia.

Macklin was the son of a doctor, he was born in India, when the family returned to England, they settled in the Scilly Isles off the coast of Cornwall where his father set up practise. After a short spell working as a deckhand, Macklin read medicine at Manchester University, it was very shortly after qualifying that he applied for the Endurance expedition.

On return to England, Macklin Joined the army as an officer in the Medical Corps serving in France and Russia during the First World War. He served first with the Yorks later transferring as medical officer to the Tanks. Going to the Italian front with his battalion, he won the Military Cross (M.C.) for bravery in tending the wounded under fire.

Shackleton invited Macklin to join him again for the Quest expedition in 1922, which like many of the old Endurance crew, he was happy to do so. As the ship's surgeon, on Shackleton's death at South Georgia, it fell to Macklin to prepare the body initially for transport to South America and then for burial on South Georgia.

Back home, he moved to Scotland and set up a practice in Dundee where he remained from 1926 to 1947. In the Second World War, he was a Lieutenant Colonel in the Medical Corps, serving in East Africa.

In addition to the M.C. (Military Cross) awarded in WW1, he also received the T.D. (Territorial Decoration) and later the O.B.E. (Order of the British Empire ).

At the age of 58, he married and moved further north to Aberdeen working in various positions in Aberdeen hospitals before retirement in 1960. He died aged 77 in 1967.

I called the men together, explained my plan, and asked for volunteers. Many came forward at once. Some were not fit enough for the work that would have to be done, and others would not have been much use in the boat since they were not seasoned sailors, though the experiences of recent months entitled them to some consideration as seafaring men. McIlroy and Macklin were both anxious to go but realized that their duty lay on the island with the sick men.

Another fierce gale was blowing on April 22, interfering with our preparations for the voyage. The cooker from No. 5 tent came adrift in a gust, and, although it was chased to the water's edge, it disappeared for good. Blackborow's feet were giving him much pain, and McIlroy and Macklin thought it would be necessary for them to operate soon. They were under the impression then that they had no chloroform, but they found some subsequently in the medicine-chest after we had left.

Feature Name: Mount Macklin
Feature Type: summit
Elevation: 1900
Latitude: 54°45'S
Longitude: 036°03'W
Description: Mountain having 2 peaks, the higher 1,900 m, between Mount Carse and Douglas Crag in the S part of the Salvesen Range of South Georgia. Surveyed by the SGS in the period 1951-57, and named by the UK-APC.