Antarctica is unique amongst the continents and major landmasses on earth in that it was genuinely discovered in historical times. Who exactly discovered it is not as clear as you might think.

The Discovery of Antarctica
First Sightings and First Landings

Unlike most places that were "discovered" by other civilizations but had endemic peoples already living there for thousands of years previously, Antarctica has never had a native human population.

The idea of Antarctica was first mooted by ancient Greek philosophers. They knew about the Arctic from sailing voyages, descriptions and stories, they called it Arktos, "The Bear", named for the constellation of the Great Bear. They had proven that the world was a sphere and so postulated that there should be something at the pole opposite to the Arctic to balance the world out. They called this undiscovered land mass Ant-Arktos, meaning "opposite the bear". The continent of Antarctica thus appeared on world maps for hundreds of years prior to anyone ever approaching anywhere near it.

A French produced world map from approx. 1530, northern hemisphere on the left and southern on the right.

A large Antarctic continent labeled "Terra Australis" is shown even though there was no evidence at the time for its existence. Also note the absence of Australia which would not be visited by Europeans until the first years of the 1600's.

Whaling and sealing voyages in particular in the late 1700's and early 1800's would venture ever further south when rounding Cape Horn at the tip of South America. It was known that going further south often meant stronger winds and so greater speed, though at grave risk of hitting floating ice of all sizes and of winds and seas that could prove fatal to the ship and crew.

Captain James Cook with the ships HMS Resolution  and HMS Adventure  was the first to cross the Antarctic Circle on the 17th of January 1773 in the Ross Sea region, he reached 71° 10'S a year later, while he didn't sight land he came to within 80km (50 miles) and saw deposits of rock held in icebergs indicating that a more southerly land existed.

The first sighting of Antarctica is now widely acknowledged to have taken place on the 28th (maybe the 27th) of January 1820 during the voyage of two Russian ships, the Vostok  and Mirnyi  under the command of Captain Fabien (Thaddeus) Gottleib von Bellingshausen during a two year exploratory expedition around the world to discover new lands for the Russian Empire. Bellingshausen's ships were the first to have crossed the Antarctic Circle since Cook nearly 50 years earlier, they did so on the 26th of January 1820.

For many years it was thought that Irishman Edward Bransfield on a British expedition was the first person to sight the Antarctic continent (rather than offshore islands) on the 30th of January 1820 with the ship Williams. The previous year the same ship under the command of captain William Smith had discovered the South Shetland Islands while on a commercial voyage. When Smith reported what he had found on returning to Valparaiso, Chile, Captain Shirreff of the British Royal Navy chartered the ship and appointed Bransfield as captain to return south the following season and investigate the area further. 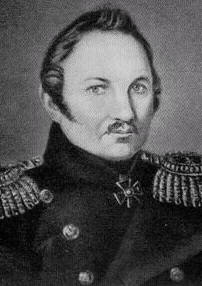 Bransfield saw the Trinity Peninsula, at the northernmost tip of the Antarctic Peninsula and described "high mountains, covered with snow", one of which was later named Mount Bransfield by French explorer Dumont D'Urville, the sea passage between the peninsula and South Shetland Islands was also later named the Bransfield Strait.

While Bransfield was aware of what he saw at the time, it seems that Bellingshausen might not have been, unsure if it was land or an iceberg. In any case, Bellingshausen's claim was ignored for many years due to a lack of interest on his return to Russia, an incorrect translation of his journal and some confusion over the specific date of his observations. In more recent years closer analysis and better understanding of the records show that Bellingshausen saw the continent earlier than anyone else, descriptions of what he saw tie in with the lie of the land, mountain peaks, ice cap etc.

Some national pride has led to variously the British, the Irish and Russians claiming their man was first with the Americans also having a shout, though their man, Nathaniel Palmer was rather late not turning up until November 1820. Bellingshausen's primacy of claim is sometimes therefore described as "technically the first" or some similar description by those who would rather promote one of the alternatives.

The first claimed landing on continental Antarctica was by British-American sealing Capt. John Davis in the ship Cecilia  at Hughes Bay on the Antarctic Peninsula on the 7th of February 1821. Some of the crew went ashore for less than an hour to look for seals, this claim cannot be confirmed.

The first undisputed landing on Antarctica didn't happen until much later on January the 24th 1895 at Cape Adare during the whaling voyage of the ship Antarctic  led by Henryk Bull. A small boat with six (possibly seven) men on board rowed ashore during calm conditions.

It is not clear exactly who was the very first of this group to set foot on Antarctica, they all did so within a few moments of each other. Norwegian Carsten Borchgrevinck who would later return to this beach with an expedition on the Southern Cross made perhaps the most noise about being the first, while New Zealander Alexander von Tunzelmann and captain Leonard Kristensen also claim to have been the first.

"Oi Borchgrevinck! We talked about this and agreed, when we got here we'd all get out together!"

A sketch drawn by Borchgrevinck himself of the landing at Cape Adare showing himself as the first to set foot on Antarctica.

Note that he doesn't portray Tunzelmann as holding the boat as he has been described. You'd think he'd have made himself look a bit more explorer-like rather than sneakily jumping out first before anyone else realised what was happening.

While this 1895 landing is the first that is fully authenticated and accepted by all historians, it seems unlikely that it was actually the first landing on the continent of Antarctica. John Davis had certainly come very close to landing 1821 if he indeed didn't and with much sealing and whaling activity in the intervening 74 years it seems all but impossible that someone wouldn't have gone ashore during this time.

Part of the difficulty in specifying when and where it happened is that at the Antarctic coast and islands are often temporarily or permanently attached to the mainland by ice of various forms and so it can be difficult to tell at the time if you are standing on an island, the mainland or simply some form of connecting ice platform over the sea.

Also, sealers and whalers were notoriously secretive about their hunting grounds and either wouldn't be interested in the kudos of becoming the first to set foot on a "New" continent or far more likely wouldn't want to give away to their rivals exactly where they had been to hunt for their prey. A sealing ship or group of them could quickly wipe out all of the seals on a secluded beach leaving nothing for the ship that had travelled a great distance hoping to take the harvest for themselves. Publically announcing where you had set foot on Antarctica would be to tell your rivals where your sealing grounds were.