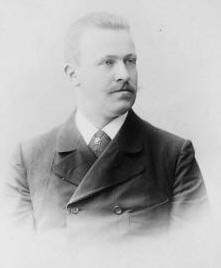 The voyage of the Gauss led by Erich von Drygalski was the German response to the call of the Sixth International Geographical Congress to the International scientific community to explore Antarctica.

Erich von Drygalski, a Professor of geography and geophysics at the University of Berlin was chosen to lead the expedition as he had previous polar experience on an expedition to Greenland. He had a good track record of being able to carry out serious scientific studies in polar conditions.

The expedition was fully funded by the German government, including the building of a new ship for the purpose, the Gauss, named after the great German scientist Karl Friedrich Gauss. The ship cost 500,000 Marks (around £25,000), she was a barquentine, 152 feet long with a beam of 37 feet and a 325hp auxiliary engine (sail was still the main means of propulsion). The ship seemed to be a fine vessel at first. She was spacious and strong, each officer and scientist had his own cabin, there were two dining and social areas. The bow and stern were finished with steel reinforcement and there were fine woods throughout. Unfortunately however, she was less impressive in action, she was slow, uncomfortable in rough seas, dark on the inside and oppressively hot in the tropics.

The Gauss left Kiel on August the 11th 1901 for Antarctica. She was to research the sector between 60° and 90° East as that was close to where the south magnetic pole was and little was known of the area. The Gauss reached isles Kerguelen (a set of sub Antarctic Islands) on January the 2nd 1902. On January 31 the Gauss left Kerguelen for Antarctica and seven days later they sighted their first iceberg.

The Gauss on the voyage south

Albatross on the deck of the Gauss

Captured albatrosses on board

Ludwig Ott in winter clothing on board the Gauss

Land was sighted on the 21st of February, being edged with ice cliffs 40-50 metres (130-165 feet) high where it met the sea and rising in the distance to over 300 metres. This was named Kaiser Wilhelm II Land (now called the Wilhelm II Coast). The Gauss tried to sail on further, but became trapped by forming sea-ice. The crew tried to blast a way out using explosives, but without success and by the 2nd of March it was clear that the Gauss became trapped for the winter, 74 kilometres (46 miles) from the coast.

Drygalski was primarily a scientist, not a glory seeker or self-publicist. His intention was to discover as much as he possibly could about the sector of Antarctica he was in, records of latitude had no interest to him and he and the scientific members of the crew gladly set about doing what they could with the time they had while trapped in the ice. Huts were set up for observations of magnetic, meteorological and astronomical phenomena. Holed were drilled through the ice to dredge the sea-floor and rocks collected from nearby icebergs.

The Gauss had a dog team aboard, though sledging journeys were delayed for a while to let the ice thicken and become reliable for travelling. The first sledging party headed south on the 18th of March, returning 8 days later to report a 300m (1000ft) mountain at latitude 66°40' S, 50 miles from the ship, this was named Gaussberg.

Drygalski became the second man to fly in Antarctica when he made the first ascent in a hydrogen-filled reconnaissance balloon on March the 29th to a height of 490m (1600 feet), he would have been the first but was beaten by a narrow margin when Scott ascended in a balloon over the Ice Barrier on the 4th of February the same year on the Discovery expedition.

"It was so warm up there I could even take off my gloves...the sight from this altitude was grandiose. I could see newly discovered Gaussberg and...gave my description via telephone to the deck of the ship. It was the only ice-free landmark in the surrounding area".

Aerial view of the Gauss in the ice - 1902 March 29, this picture was obtained from a balloon and is one of the first aerial photographs of the Antarctic.

The balloon was used later the same day by Ruser and Phillipi and the results of their observations of pack to the north used to plan for the future. The balloon was packed away after the second flight and not used again.

Gaussberg tuned out to be the furthest south reached by the expedition, more trips were made there in April before the winter set in fully and an igloo, meteorological hut and supply depot left. Drygalski climbed the summit of Gaussberg on the final trip and described a landscape made entirely of ice other than the rocky outcrop of Gaussberg itself.

Winter arrived and the men busied themselves as best they could. The ship was well supplied and there was enough private and public space. Lectures were arranged and clubs sprang up, a glee-club, smoking club, card-clubs and a midwinter celebration arranged. Though the men found that the winter had its hardships and became depressed due to the lack of daylight and the cold and storms outside which frequently confined them to the ship, they survived as well as any other contemporary winterers.

Drygalski had hoped to be able to attain 72° or 73°S but circumstances in the spring meant that this idea was abandoned. He thought there was no good scientific reason to travel further south than Gaussberg  He had read about the circumstances of the crew of the Belgica and the difficulty they had in escaping the ice. While the Belgica was trapped in ice around 2m (7 feet) thick, the Gauss was in ice that was 5-6m thick (16-19 feet), and on top of this were snowdrifts of up to 12m (40 feet). Members of the Belgica expedition had noticed that dark objects melted the ice under them due to the heat they absorbed from the sun, so Dygalski gave orders for all ashes and other waste to be saved.

Spring arrived and seals and birds were seen in large numbers again. The ice had started to break up, but the ship was about 600m (2000 feet) away from open water. Explosives and long ice saws were put to use to try and cut a channel to the open water, but without success. Drygalski noticed that soot from the ships funnel had landed on the ice nearby and was causing the ice to melt. He ordered the saved ashes and other waste to be spread along a line from the ship to open water and it started to have an effect.

"Success came immediately. The ice under the dirt started to melt. Within a month we had a long water channel almost two metres deep. Although there were still four to five metres of ice underneath, the channel widened constantly"

Release seemed to be ever closer, but on the 21st of January 1903 a heavy gale closed the channel and drifted snow over the open water areas as if they had never been there. A week later on the 28th of January, the whole area was on the move and Drygalski ordered that all equipment on the ice be brought back on board, the Gauss was now drifting with the ice, though still trapped within it.

On February the 8th, Drygalski wrote

"we suddenly felt two sharp jolts in rapid succession...it was like a revelation, and with a cry 'the ice is breaking', I jumped out on to the deck".

A break had opened to open water and the Gauss was carefully steered out along it. The ship then started to cruise along the Antarctic coast seeking out a suitable site to spend the second winter, though no such safe site was found and by April with the season fast advancing, Drygalski made the decision to leave Antarctica for that season writing:

"It was a most difficult decision, certainly the most difficult one I had to make, but it was necessary. There was no safe place to spend the winter here..."

The ship sailed once again for the Kerguelan Islands and then continued on to Cape Town in South Africa docking on the 9th of June. From there Drygalski sent a request to Berlin for another winter to be spent in Antarctica. His request was denied, most probably as the Kaiser was disappointed that no new territory of significance had been discovered, nor was there any sensational adventure to report. The Gauss sallied northwards again reaching Kiel on November the 23rd 1903. She was sold to Canada to help pay for the expedition.

A detailed diagram of an Adelie penguin

A detailed diagram of a Chinstrap penguin

As a scientific voyage, it had been a huge success and the achievements received high praise from the scientific community. Twenty volumes of reports were published from 1905-1931 (they certainly occupy more library shelf space then those of any comparable voyage I have seen). The expedition provided strong evidence for the existence of the Antarctic Convergence, six hundred miles of coastline had been surveyed and 1,440 species of living organism endemic to the Antarctic were described.

As an expedition of public interest however it was far overshadowed by others around the same time that had reached higher latitudes (closer to the Pole). What was not publicly appreciated was that the Gauss had been to a totally new region, never previously visited where she was working alone and making public completely new discoveries. Compared to more sensationalist adventures though, the lay-man sees a new species or ten of obscure fauna or carefully described scientific observation as of little value.