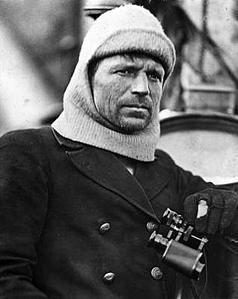 Frank Worsley was pleasingly possessed of some eccentricities  - claiming that his cabin was too stuffy, for instance, and sleeping every night on the passageway floor.

"One night I dreamed that Burlington Street was full of ice blocks and that I was navigating a ship along it. Next morning I awoke and hurried along to Burlington Street. A sign on a door caught my eye. It bore the words "Imperial Trans-Antarctic Expedition". I turned into the building, Shackleton was there, and after a few minutes conversation he announced "Your Engaged"

In 1914 at the age of 42, he joined Shackleton's 1914-17 "Imperial Trans-Antarctic Expedition" as the master of the Endurance, the expedition ship. As a captain of a ship however, his skills were somewhat stretched, by the time Shackleton joined the ship at South America, Worsley was effectively made second in command due to his ineffective handling of indiscipline and inappropriate behaviour in the crew. True to form however, this was handled diplomatically by Shackleton and effectively played down, Worsley would move than prove his worth later in the expedition.

When the Endurance was lost, crushed by the pack ice in the Weddell Sea, Worsley took charge of one of the lifeboats, the Dudley Docker and guided the crew towards a distant speck on the far distant and unseen speck on the horizon that was Elephant Island. Shortly after arriving on Elephant Island, Worsley accompanied Shackleton and a small party on another lifeboat, the James Caird on a sixteen day journey to South Georgia to fetch help for the rest of the men stranded on Elephant Island.

This was a remarkable feat of navigation as well as of seamanship and perseverance by the men. Worsley was only able to take a navigational reading every few days due to weather conditions, a small error would have meant the James Caird heading into open ocean with no hope of rescue for anyone.

Frank Worsley was a New Zealander, born in Akaroa. He became an apprentice to the merchant navy at the age of 15 serving on both sailing and steam ships.

He returned to sea after the Endurance expedition, commanding "Q boats" in the First World War - anti-submarine boats disguised as merchant shipping. He was twice decorated for anti-submarine action, once with the D.S.O.

Worsley, known to his intimates as Depth-Charge Bill, owing to his success with that particular method of destroying German submarines, has the Distinguished Service Order and three submarines to his credit.

Worsley became part of the North Russia Expeditionary Force at the request of Shackleton In late October 1918. This was an Endurance reunion as Shackleton, Wild , Macklin, Hussey and McIlroy were also part of the same force. Worsley won the D.S.O. for the second time for leading a daring land raid against the Bolsheviks.

On my return, after the rescue of the survivors of the Ross Sea Party, I offered my services to the Government, and was sent on a mission to South America. When this was concluded I was commissioned as Major and went to North Russia in charge of Arctic Equipment and Transport, having with me Worsley, Stenhouse, Hussey, Macklin, and Brocklehurst, who was to have come South with us, but who, as a regular officer, rejoined his unit on the outbreak of war. He has been wounded three times and was in the retreat from Mons. Worsley was sent across to the Archangel front, where he did excellent work, and the others served with me on the Murmansk front. The mobile columns there had exactly the same clothing, equipment, and sledging food as we had on the Expedition. No expense was spared to obtain the best of everything for them, and as a result not a single case of avoidable frost-bite was reported.

In 1925 he became joint leader of an Arctic expedition to Franz Josef Land and in 1935 was part of a treasure hunting expedition in the Cocos Islands.

Despite retiring from the sea in 1939, he remained a Royal naval reserve officer and continued to instruct at the Royal Naval College in Greenwich until his death in 1943. He had secured a job on a merchant ship called the "Dalriada" working at Sheerness in 1941 by lying about his age, he claimed to be just 65, when he really was 70!, unfortunately he lost the job once found out.

He died of cancer of the lung in February 1943, just a few days after diagnosis. His was cremation at Woking and the memorial service at Greenwich College Chapel was as grand an affair as would expected for someone with Worsley's maritime history. His ashes were scattered at sea near the mouth of the River Thames. 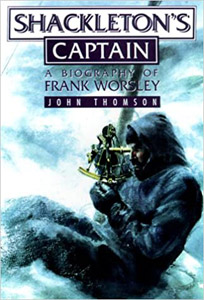