Born in Saint Vincent in the Windward Islands in the Caribbean in 1881 and educated in London, Atkinson was light heavyweight boxing champion at St. Thomas's hospital during his medical training, he qualified as a doctor in 1906 and joined the Royal Navy in 1908.

He joined Scott on the Terra Nova expedition as a parasitologist and chief medical officer, most of his time being taken up by the former, then as today there is usually little call for the medical skills of a doctor on an expedition, they are there to account for the unforeseen..

He was involved with depot laying in January-March 1911 as preparation for the south pole attempt later in the year. Starting in November 1911 he accompanied Scott's Polar Party by leading a pony pulling a sledge as far as the upper Beardmore Glacier depot before returning to the expedition base. He was left in command of the Terra Nova Expedition's Cape Evans base as the remaining officer for most of 1912 after Scott and his party died on the way back from the Pole and with Campbell's Northern Party forced to over winter after being unable to return to base. The winter was difficult with two expedition parties having not returned and the Pole Party almost certainly all dead, though without definitive confirmation.

On the 29th of October 1912 Atkinson led a search party which found the tent with the bodies of Scott,  Bowers and Wilson along with Scott's diary which detailed the disaster that had befallen them. They searched for Oates's body with no success though did find his sleeping bag and returned to the base hut on the 25th of November.

Following the expedition, he worked in China where he discovered the cause of the parasitic disease schistosomiasis (or bilharzia). He returned to England at the outbreak of the First World War when he enlisted and served with distinction being decorated twice and wounded several times, he served at Gallipoli, at the Somme and supported the White Army after the Russian Revolution. Following the war, he remained in the navy reaching the rank of Surgeon Captain, he retired in 1928 on health grounds following the death of his wife and died suddenly at sea in the Mediterranean in 1929 at the age of 47, he was buried at sea.


References to Edward Atkinson by Scott in "Scott's Last Expedition"

Feature Name: Atkinson Cliffs Type: Cliff Latitude: 71° 18'00S Longitude: 168° 55'00E Description: High coastal cliffs, 4 mi long, between the lower ends of Fendley Glacier and Pitkevitch Glacier on the N coast of Victoria Land. The feature was mapped in 1911 by the Northern Party of the British Antarctic Expedition (BrAE), 1910-13, and named for Dr. Edward L. Atkinson, surgeon of the expedition. 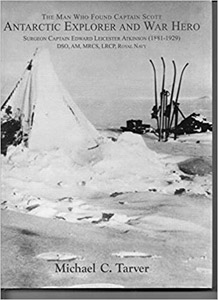