Antarctica is the most pristine place on earth although it is not as unspoiled as you might imagine.

Human Impacts on Antarctica and Threats to the Environment - Overview

Some species of Antarctic animals have been taken to the verge of extinction for economic benefit. Others have been killed incidentally or disturbed, soils have been contaminated, untreated sewage has been discharged into the sea and rubbish that will not decompose or break down for hundreds of years has been left behind in even the remotest parts.

Recently attitudes have changed as we begin to realise that there are few untouched and unvisited places left on earth and that they are tremendously important to humanity.

Antarctica's clean air, water and ice of are of importance to science for understanding how the Earth's environment is changing both naturally and as a result of human activity. Tour operators are tapping a huge and ever increasing demand to visit the Earth's last great wilderness.

Both science and tourism have the potential to damage the very qualities that draw them to Antarctica.

The concern for the environmental management of Antarctica is how to make good past damage and how to reduce the current and future impacts.

In approximate order of the assessed threat:

1 - Climate change / Global warming, resulting in a warming of the sea and loss of sea ice and land-based ice, this is greatest long-term threat to the region. Already some ice shelves have collapsed and ice slopes and glaciers have retreated. Oceanic acidification (from extra dissolved carbon dioxide) is already leading to the loss of some marine snails thought to have a significant part to play in the oceanic carbon cycle. The breeding populations and ranges of some penguin species have been altered.

2 - Fishing, both legal and illegal. The world's oceans are over-fished, the chances are that if investments into the kinds of boats and fishing gear needed for Antarctica are made, then it too will suffer this same fate. Fishing for krill could be particularly significant as these are at the bottom of many Antarctic food chains. There are already illegal fishing boats that ignore current regulations.

Southern fur seals and blue whales were hunted to the edge of extinction in Antarctica, while the fur seals have recovered well, the world's blue whale population is still only probably 2-5% of the pre-whaling numbers.

3 - Invasive species. Organisms that are not native to Antarctica are being taken there in various ways, on ships, or attached as seeds to boots and clothing, some of these are now able to survive there as a consequence of climate change. Rats in particular are a potential threat to Antarctica's many species of ground nesting birds on sub-Antarctic islands which are particularly vulnerable as there are no native ground based predators for them to have any experience in defending themselves against.

In a piece of positive news, the sub-Antarctic island of South Georgia was declared rat and mouse free in early 2018, 250 years after they were first accidentally introduced by passing ships. Ground nesting native birds long since banished to a few outlying islands the rats could not reach, have already been seen to return to the main island in what was the world's biggest project of its kind.

4 - Tourism, with the accompanying pollutants that accompany ships and aircraft, the possibility of oil spills and the effects of lots of people and infrastructure on wildlife and the wider environment.

5 - Pollution, CFC's and other ozone depletors are responsible for the ozone hole that has appeared over Antarctica for over 40 years, chemicals produced thousands of miles away are found in Antarctic ice and in the bodies of wildlife. Discarded equipment, chemicals and oil can degrade the landscape. Fishing nets, plastic, lines, hooks etc. carried by the sea can result in great suffering or loss of life by birds, fish and marine mammals.

6 - Exploration and exploitation of mineral reserves, oil and gas. Not currently economically viable, but as the need becomes greater and as technology advances, this will become an increasing threat. The Antarctic Treaty bans all mining and mineral exploitation indefinitely, though this comes up for review in 2048 (in other words, it isn't really banned indefinitely at all).

7 - Direct impacts associated with the development of infrastructure for scientific bases and programmes. The construction of buildings and related facilities such as roads, fuel storage, runways etc. and the associated disposal of waste on an ongoing basis.

Antarctica is an important laboratory for research into the global impacts of the industrialized world.

Lakes on Signy Island in the Maritime Antarctic for instance have shown possibly the fastest local response to regional climate found anywhere on Earth. Average lake temperatures having risen by 0.9°C in 15 years while temperatures in the surrounding seas have stayed constant.

Global changes may have effects that impact directly on the Antarctic environment and its fauna and flora. Global warming may contribute to break-up ice-shelves causing loss of habitat for animals dependent on the ice-shelf as well as the effect of increasing sea level on low-lying regions in the rest of the world.

Increasing Ultra Violet (UV) radiation due to the ozone hole may cause changes to phytoplankton communities and could have effects further up the food chain.

Antarctica is a sensitive indicator of global change. The polar ice cap holds within it a record of past atmospheres that go back tens or even hundreds of thousands of years, allowing study of the earth's natural climate cycles against which the significance of recent changes can be judged. 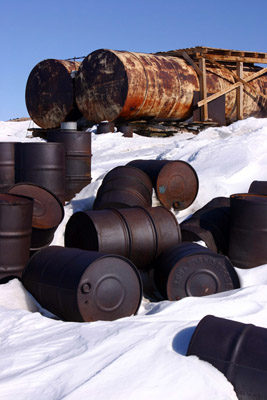 In the earlier days of Antarctic programmes (well into the 1980's) most waste was dealt with in one of three ways:

There was also a variation of the second approach whereby larger sinkable items such as broken and useless vehicles were taken out onto the sea ice and left. When the ice broke up in the spring, the rubbish on them would break out too and they would be dumped further out at sea as the floe they were on melted or tipped up.

Further inland, rubbish was often dropped down a crevasse or just left where it was. In the harsh Antarctic environment, even large items such as empty oil drums can be blown by the wind for miles from where they were originally dumped so spreading the problem. Broken down or crashed vehicles and aircraft were usually just left where they were and many are still there today.

A part of the Antarctic Treaty called the Madrid Protocol (agreed on at an Antarctic Treaty conference in Madrid) added to the original in 1991 requires that national Antarctic programmes clean-up abandoned work sites and waste tips so long as the process of clean-up does not cause greater adverse impacts or cause the removal of historic sites or monuments. 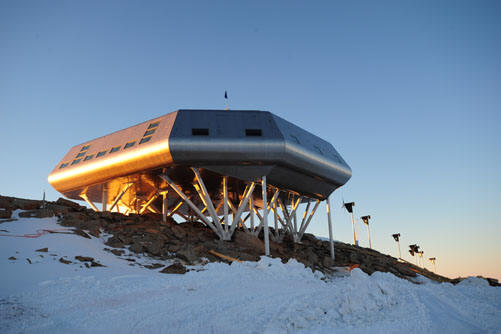 Environmental audits are now carried out around scientific stations, on land and in the sea to assess the impact that the base and its activities is having on the area around it. Any activity is bound to have some degree of disturbance to the environment, vehicle exhausts, wildlife disturbance, waste of various types being produced. Waste of all kinds is returned to the country of origin wherever possible.

An increasing number of stations are using alternative energy sources, Mawson - Australia, Princess Elisabeth - Belgium, Scott - New Zealand and McMurdo - USA, all have wind powered electricity generators - a fairly obvious choice for the windiest continent on earth, but problematic as the wind is so strong so often that the wind turbines are at risk of damage. The Belgian Princess Elisabeth base (pictured) is a zero emissions base that runs entirely on wind and solar energy with a lot of help from very significant insulation.

Protected areas are being set up with various levels degrees of protection, no vehicles allowed, limitations to annual visitors, or even no people allowed at all in some cases.

Expeditioners are now educated far better about protecting the environment, expeditioners, tourists and other visitors to Antarctica are now guided by codes of conduct.