One of the most prominent figures of early Antarctic exploration because of his easy manner and the great respect he received from the men he worked with, because of the paintings and drawings he made and because he was one of the five men making up Scott's team that reached the South Pole, but died on the return journey.

Born in Cheltenham, England, the son of a physician, educated at Cheltenham College and Caius College Cambridge where he read Zoology before qualifying in medicine at St. George's Hospital London. Shortly after he qualified as a doctor, Wilson became ill with tuberculosis, during the long convalescence he practiced and developed his skills as an artist.

In 1901, Wilson applied to be doctor on Scott's Discovery Expedition to Antarctica, he was the second doctor to be appointed, originally because there was to be a landing party separate from the main expedition - this never happened however and both doctors stayed with the expedition. He was not fully recovered from his illness when first appointed, but Scott saw his potential and took him on as vertebrate zoologist and artist as well as doctor.

Expeditions, then and now take doctors, but it is expected that with the high level of fitness of the men, the doctor should have relatively little to do in the way of medicine, with the exception of accidents or unforeseen illness, so there is always a secondary occupation that the doctor can fulfill until such time that the medical skills are needed. Wilson's specific job was to deal with the birds and seals that the Expedition came across and to write the appropriate section for publication in the report of the expedition.

He made an attempt on the South Pole with Scott and Shackleton in 1902, they reached the furthest south point at that time, 480 miles from the pole, Shackleton was suffering from scurvy and unable to pull the sledge, after 93 days and 960 miles, they managed to struggle back to safety. Shackleton invited him to join his Nimrod expedition in 1907, but he declined, partly from loyalty to Scott.

On the Terra Nova Expedition Wilson accompanied Cherry-Garrard and Bowers on a trip to Cape Crozier to retrieve an emperor penguin egg during the winter of 1911, famously written about in Cherry-Garrard's book "The Worst Journey in the World". The three men endured the coldest temperatures recorded on the expedition, as low as -57C (-70F) in the dark of the Antarctic night.

Wilson was involved with depot laying in January-March 1911 as preparation for the south pole attempt later in the year. Starting in November 1911 he accompanied Scott's Polar Party initially by leading a pony named Nobby pulling a sledge of supplies and later manhauling as the ponies were killed as they got nearer the pole, food ran out for them and conditions became more difficult. He was one of the 5 men who made up the final South Pole Party, while they made it successfully to the South Pole on the 17th of January 1912, they all perished on the return journey. Wilson died in the tent at the last camp with Scott and Bowers at the age of 39.

"Wilson and Bowers were found in the attitude of sleep, their sleeping-bags closed over their heads as they would naturally close them."

A lasting and acclaimed legacy is the collection of water colour pictures that he made during his two Antarctic expeditions, E. A. Wilson's watercolours. There is a statue of him in Cheltenham sculptured by Scott's widow Kathleen.

"Words must always fail me when I talk of Bill Wilson. I believe he really is the finest character I ever met." - Scott

l to r: Forde, Cherry-Garrard and Wilson
with a dead leopard seal on a sled

Wilson drawing the aurora in the hut

Shackleton, Scott, Wilson
On their South Pole attempt in 1902, they came to withing 480 miles of the pole

The Cape Crozier party
l to r: Henry Robertson Bowers, Edward Wilson, Apsley Cherry-Garrard. This journey was what Cherry-Garrard would later write about in his book "The Worst Journey in the World".

References to Edward Wilson by Scott in "Scott's Last Expedition"

Feature Name: Cape Wilson
Type: cape
Latitude: 82°14'S
Longitude: 163°47'E
Description: A bold, rocky, snow-covered cape, forming the SE end of the Nash Range and marking the northern entrance point to Shackleton Inlet on the western edge of the Ross Ice Shelf. Discovered by Capt. Robert F. Scott, RN, in December 1902, on his attempted trip to the South Pole. He was accompanied on this trip by Lt. (later Sir) Ernest H. Shackleton, RNR, and Dr. Edward A. Wilson. 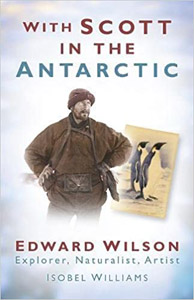 Edward Wilson
With Scott in the Antarctic
Isobel Williams
biography