An entirely volcanic island in the Ross Sea off the coast of Antarctica in McMurdo Sound at 77°30'S 168°00'E, Ross Island is made up of four volcanoes including Mount Erebus, the worlds most southerly active volcano 3,794m (12,448ft) high and one of a very few worldwide with a permanent lava lake in the crater. Ross Island gives the impression of being part of the mainland as there is a permanent ice connection to the Ross Ice Shelf along the southern edge.

Ross Island was discovered by Sir James Clark Ross in 1841 and was thought to be part of the mainland. It was found to be an island by the British National Antarctic Expedition in 1901-04 and named for Ross by Captain Scott. Mount Erebus was named by Ross for his ship. The extinct volcano Mount Terror on Ross Island was named for Ross's other ship on his expedition at the time.

Ross Island has played a large role in the history and exploration of Antarctica. It has three historic huts that were built and used by the explorers Scott and Shackleton in the Heroic Age of Antarctic Exploration from 1898 to 1922.

Mount Erebus summit crater looking out to the Hut Point Peninsula and Erebus Ice Tongue with islands and the mainland in the distance.

The Erebus Ice Tongue looking towards the Erebus Glacier and Ross Island.

An ice tongue forms where a valley glacier moves quickly out to sea, the ice is freshwater ice fed in this case by accumulated snow from the slopes of Mount Erebus which floats when it meets the sea.

Aerial view of the Hut Point Peninsula, Erebus Glacier and Ice Tongue with Mount Erebus to the top. NASA 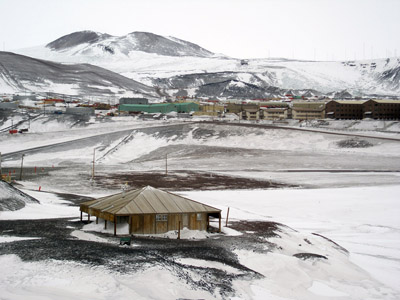 Captains Scott's Discovery Hut built for his 1901-04 expedition with McMurdo Station (USA), established 1956, in the background. 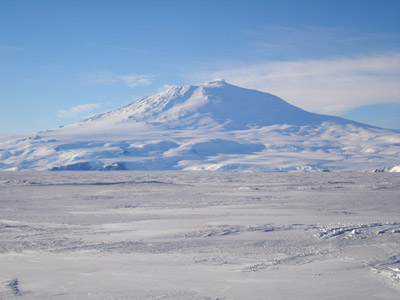 Mount Erebus from the sea ice.

The Ferrar Glacier on the mainland near to Ross Island, this glacier discharges into McMurdo Sound

Disclaimer - Information in the Antarctic Digital Database has been obtained from sources believed to be reliable but its accuracy and completeness, and the validity of the opinions based thereon, are not guaranteed. As every effort has been made to provide accurate information in this database, SCAR would appreciate it if users could indicate in writing any errors that may be noticed. SCAR is not inviting reliance on these data, and the user should always check original published data. The information in this database is subject to change. Questions about the data should be addressed to Adrian Fox