Mount Discovery was discovered by Captain Scott's British National Antarctic Expedition, 1901-04, and named after their expedition ship the Discovery. Originally known simply as "The Bluff" the name Minna Bluff was given by Captain Scoot after the wife of Sir Clements Markham, one time president of the Royal Geographical Society and a strong supporter of the expedition.

Minna Bluff from the south side, looking down on an embayment, what would be an ocean bay but is actually the ice of the Ross Ice Shelf, floating ice up to hundreds of metres thick

Mount Discovery with a fata morgana at the bottom, an illusion caused by an atmospheric phenomenon just above the sea ice creating a reflection 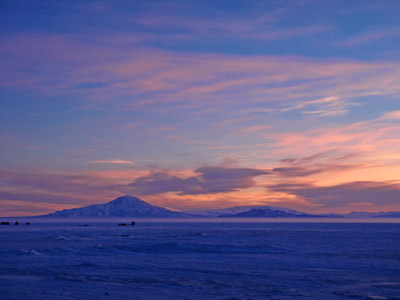 Mount Discovery, left and the Brown Peninsula, both part of the Antarctic mainland.

Mount Discovery and the New Zealand Scott Base
the summit is about 68 km (42 miles) from the base.

Topographic Reconnaissance maps of Antarctica. Originally published at 1:250,000-scale by the U.S. Geological Survey in cooperation with the National Science Foundation.