Signy Island in the South Orkney's group is roughly triangular in shape, 4 miles long and with a "base" of just under 3 miles wide, lying to the south of the middle point of Coronation Island. Unnamed at the time, the appearance of the island was roughly plotted on James Weddell's chart of 1825.

The island was given it's name by Capt. Petter Sørlle, of the Norwegian whale-catcher Paal who made a running survey of the island in the 1912-13 season. Captain Sørlle named the island after his wife, Signy Sørlle.

Norwegian biologist Lauritz Sømme worked at the Signy Island scientific station in 1979-80 and on his return to Norway located Signy Sørlle in Oslo. The base personnel of Signy station then sent her a bouquet of flowers each year on her birthday. A representative of British Antarctic Survey, D.D. Wynn-Williams visited Signy in Oslo and a large framed photograph of Signy has hung in the base from shortly after that meeting.

I am very pleased to able to present this information about Petter Sørlle and his family after I unexpectedly received an email from Signy Sørlle's granddaughter Anne Lind from Norway in January 2005.

Petter Sørlle made many whaling trips in the Antarctic.

He invented the stern slipway for factory ships in 1925. With this invention whales could be hauled up into the factory ships at sea, thus allowing them to operate throughout the open seas of the Southern, or Antarctic, Ocean without returning to the land station.

But to Petter's advantage, I must add that he also wrote many letters to newspapers and authorities here in Norway, warning that there must be made international regulations, in order to protect the whales from extermination.

He also invented a fire ladder and had lots of other ideas. He'd wake up in the middle of the night and rush to the bedroom window and make notes and sketches with charcoal on the window sill in the moon light/street light (so as not to wake up my grandmother).

They had five daughters; Reidun, Marion, Gerd, Margrethe and my mother Signe-Marie.

He missed his girls very much when out to sea for months and months at a time. And he spoiled them no end when he was home!

By the time Signy was twenty, they had three children!

My mother, their youngest (1924), was only 9 when Petter died. But just like her older sisters, she has very fond memories of Petter. He was sweet, understanding, inventive and playful.

Signy and Petter loved each other very much. She was very sweet and also very beautiful. As I mentioned before, he missed her very much when he had to go away for such long stretches at a time. Maybe that's why he named the very beautiful Signy Island after her?

Unfortunately I never got to know Petter, since he died so relatively young. But Signy lived to be almost 96, and I have very, very fond memories of here. We all called her "Mimi". Mimi was ever so proud of you people at Signy Island! And very, very touched that you "boys" remembered her birthday every year! (And I remember those wonderful bouquets as well)

A map of Signy. I tried to find a "normal map" but couldn't and then spotted the obvious - this map that I made and hangs over my desk. It is of whalebone cut using a fine bladed saw in the Antarctic winter in the way that many of us used to do, spending the time making mementoes and souvenirs of our time with available materials.

Nice pieces of whalebone were at a premium for such work. Whale bone itself was in plentiful supply not too far away as the BAS base was built on the site of a Norwegian whaling station that was built by the Tønsberg Hvalfangeri A/S company in 1920-21 and manned during the summer months only in the late 1920's.

When whales had been flensed of their blubber and other useful products, the carcass was pushed back into the sea to float away and decompose. Many of the carcasses didn't make it very far and there were substantial amounts of whalebone around beaches and coves near to the base.

The date on the map says 1986, but the whale that the bone came from would have probably have died at least 50-60 years earlier. 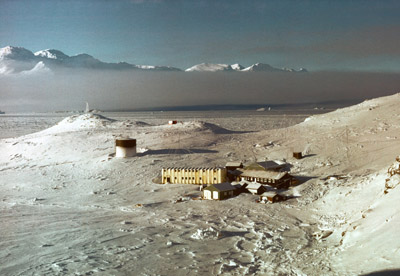 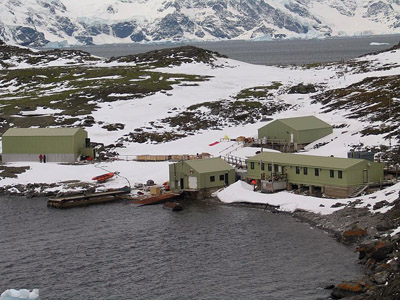