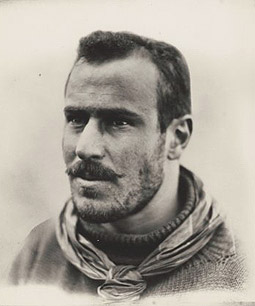 Single, born in Oxford, England. Had studied engineering: joined the Expedition as Electrical Engineer and Motor Expert. A member of the Main Base Party and leader of the Western Sledging Party, he remained in the Antarctic for two years, during which time he was in charge of the air-tractor sledge, and was engineer to the wireless station. For a time, during the second year, he was in complete charge of the wireless plant.
From Appendix 1, Mawson - Heart of the Antarctic

Bickerton was a larger than life figure who engaged in numerous adventures, even before his trip with Mawson, he had returned recently from a trip looking for buried treasure on a lonely Pacific island.

For a short biography of his later life see here

Bickerton farmed in British Nyasaland in the neighbourhood of Lake Nyasa (South Africa) with his friend Frank Wild - Shackleton's second-in-command and Dr. James McIlroy between the end of the First World War and Wild and McIlroy leaving to join the "Quest" expedition in 1921. They cleared the then virgin forest and planted cotton.

Feature Name: Cape Bickerton
Feature Type: cape
Latitude: 6620S
Longitude: 13656E
Description: Ice-covered point 5 mi ENE of Gravenoire Rock which marks the N extremity of the coastal area close E of Victor Bay. Charted by the AAE under Mawson, 1911-14, and named by him for F. H. Bickerton, engineer of the expedition and leader of the Western Party which sighted the cape from its farthest west camp.
Variant Name - Cape Richardson

Frank Bickerton looking out over the sea near Commonwealth Bay