Roald Amundsen was born into a well to do Norwegian family of ship-owners and sea captains, the fourth son and youngest child of Jens Amundsen and Hanna Sahlqvist. He promised his mother that he would train as a doctor rather than go to sea as many of the men in his family had done, yet he yearned for adventure and exploration and left his medical studies at university as soon as his mother died when he was 21 years old (his father had died when he was 14). Amundsen then began a life at sea training as ship's officer.

From an early age he had enjoyed the outdoor life in his native Norway becoming skilled and experienced on skis and in travelling over snow and ice in the winter time. He slept with his window wide open on the coldest nights telling his mother it was because he enjoyed the fresh air though really it was part of his process to harden himself for his winter exploits. Amundsen was inspired to become an explorer by the example of Sir John Franklin. His hero and later on his mentor, was Fritjof Nansen, seeing Nansen's triumphant return to Christiana (now Oslo) after being the first to cross the Greenland icecap in 1889 gave Amundsen's exploratory ambitions a new determination.

Combining his love for adventure and his abilities as a mariner, Amundsen found a place on the Belgian Antarctic Expedition under Adrien de Gerlache on the ship Belgica as First Mate.

The ship sailed from Antwerp in August 1897, it was the first purely scientific Antarctic expedition, the crew all thought they would be visiting Antarctica for the summer only, leaving before winter arrived, they were mismatched with a number leaving the ship or being dismissed before reaching Antarctica undermanned and late in the season. Amundsen was not comfortable with the decisions being made by de Gerlache. By March 1898 the ship became iced into the pack for the winter with the crew unprepared to spend so long in Antarctica over the winter and largely unequipped.

The season that followed was the first time anyone had overwintered on Antarctica and was one of food shortage, boredom, physical and mental illness, scurvy and general discomfort. By July, Amundsen took command along with Frederick Cook as de Gerlache and Captain Lecointe were unable to fulfill their roles due to illness. They introduced penguin and seal meat into the diet and organised morale boosting games which turned around the fortunes of all, with many lessons hard learned.

After the winter Amundsen and Cook organised the men to cut a channel through the ice to open water so the ship could escape.

On return to Belgium, de Gerlache was feted as a hero and 9 volumes of 92 scientific works would be published from the results of the expedition. more about the Belgica Expedition.

January 26th 1898, Amundsen is the first person to ski in Antarctica

Perhaps Amundsen's least celebrated significant expedition, where he successfully negotiated the fabled Northwest Passage for the first time in a small 45 ton former fishing sloop, the Gjoa with a crew of 6 others. This journey had been Amundsen's dream from a young boy when he first became interested in polar exploration and started to avidly read tales of survival and adventure in the Arctic. Importantly for Amundsen, he gained the support of Fritjof Nansen for this journey and was given much invaluable advice about matters from financing to survival and scientific observations.

The Gjoa left Oslo at midnight on the 16th of June 1906 to evade creditors who had threatened to hold the Gjoa until a debt had been paid, they would have to wait until the passage had been traversed.

Amundsen had prepared meticulously for the expedition, this level of planning and tireless learning of the skills needed for an expedition, whether seamanship, skiing, dog handling or a host of others was to define his approach to exploration, leaving as little to chance as humanly possible.

Amundsen may have been able to sail through the passage in a single season from what we know of ice conditions, but he also wanted to re-locate the magnetic north pole and take magnetic recordings for a full year so he found a small, sheltered bay now named "Gjoa Haven" where he anchored his ship in September which iced in, he would be there for two years.

By November the first Netslik Inuit, the indigenous people of this part of the Arctic arrived and a mutually beneficial relationship arose which lasted the two years the ship was there. In particular Amundsen learned the value of reindeer skin and fur clothing which they swapped for metal items such as knives and needles. Amundsen wrote:

"My experience is that in these parts in winter the Eskimo dress is far superior to our European clothes. But one must either use it alone or not at all. Any combination is bad. Wool underwear gathers all perspiration and will soon make the outside clothing wet. Dressed entirely in reindeer skin, like the Eskimo, and with the clothing loose enough on the body to let the air circulate between the layers, one will as a rule keep the clothing dry. If one is working so hard that the clothing becomes damp in spite of everything, skin dries much easier than wool. Also wool clothing becomes dirty easily and loses its warmth. Skin clothing keeps nearly as well without washing. A further great advantage of skin is that you feel warm the moment you put it on. In woolen things you have to jump and dance like crazy before you get warm. Finally, skins are absolutely wind-proof, which is of course a very important point."

By August 1905, Gjoa Haven was ice free and the Gjoa left on the 13th reaching Cape Colbourne on the 17th, the eastern-most point reached by ships coming from the other side of the Passage from the Bering Strait, so connecting the route. At times there was just a foot of water between the keel of the Gjoa and the rocks beneath her, while she had shown there was indeed a Northwest Passage, it was barely navigable and was impractical as a useful route from Europe to the Far East. She was iced in once again however and didn't make it out of the Passage until a year later in August 1906.

Amundsen and the Gjoa reached Nome, Alaska on the 31st Of August 1906 where they were given an exuberant welcome.

The Gjoa at King Point where it overwintered in 1905-06

The Gjoa today is kept at the Fram Museum in Oslo, Norway. She was taken to San Francisco after the Northwest Passage expedition and taken out of the water in 1909 which helped to preserve her. In 2009 she was taken to Norway and brought indoors as an exhibit in an extension to the Fram Museum opened in 2013.

The Gjoa in the Fram museum in 2017 following an extensive restoration to return her to her condition before the Northwest Passage expedition.

Next page - the South Pole

The Last Viking:
The Life of Roald Amundsen

Roald Amundsen
The Quest for the South Pole, ages 9-12

The Amundsen Photographs
discovered in 1986, pictures from three of Amundsen's voyages

My Life as an Explorer
Roald Amundsen 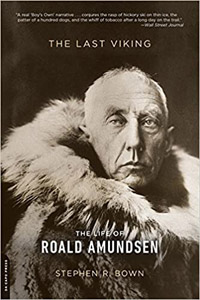 The Last Viking:
The Life of Roald Amundsen
Recommended biography