Shackleton was given a car specially built for the expedition by the Arrol-Johnston company of Paisley, Scotland. These were the pioneer days of the motor car, it wasn't terribly successful. The Nimrod expedition

Day with the car in a make-shift garage of packing cases with a tarpaulin and wood supporting the roof.

The Arrol-Johnston in action hauling stores for a depot on a suitable surface.

Motor hauling stores for a depot.
The Nimrod expedition was the first to take a recently invented motor-car to Antarctica, it kept breaking down through over-heating and getting stuck in even shallow snow.


Manhauling ended up being the most reliable means of transport, here heading towards Mount Erebus at the beginning of the attempt on the South Pole.

Preparing a sledge for hauling by pony, another transport method, and again, not particularly successful.

The Nimrod in sea ice

Mechanic, Bernard Day with the Motor-car on the sea ice. Day was responsible for the running of the car. 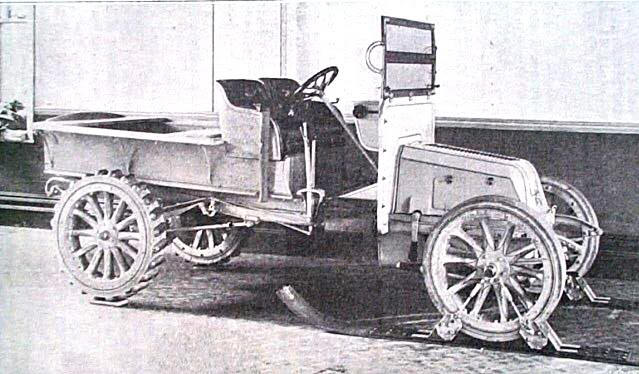 The Arrol Johnston car before being taken to Antarctica.

Ernest Shackleton was chosen to be the leader of the British Imperial Antarctic Expedition that left for Antarctica in 1907 aboard the ship Nimrod. The expedition had a number of aims both scientific and geographical, in particular there was to be an attempt to reach the South Pole.

The 4 cylinder, 12-15 horsepower alcohol-fuelled, air-cooled car came from the intervention of William Beardmore a major sponsor of the expedition, he had recently taken over Arrol-Johnston to save them from bankruptcy and wanted Scotland to have its own motor industry.

The car was donated for free, though was expected to be used as an advertisement. Motor cars were still a very recent technology at this time, Arrol-Johnston seemed to have the right credentials to make one for Antarctic conditions having already become the first company in the world to make an off-road motor car., they were however untested in all manner of situations less demanding than Antarctica, it was anticipated by some that great things could be achieved.

"Under favourable circumstances Lieutenant Shackleton computes that the machine can travel 150 miles in twenty four hours and .... he thinks there would be a fair chance of sprinting to the pole"
- Interview in "The Car"

Unfortunately however it would transpire otherwise, the engine had not been tested in extreme cold and a suitable system for providing traction in snow had not been devised. The car was taken South without being properly tested in conditions that it was likely to encounter. One thing was abundantly clear to anyone with even a passing acquaintance with such conditions as might be encountered in Antarctica was that ordinary wheels didn't fare well in snow.

The car was brought as deck cargo in a crate on the Nimrod's deck, five ponies and some stores had to left behind as there was no more room on the ship.

The car was first tried when it was clear that the Nimrod could not get as close to Hut Point (the chosen spot for a base) as was hoped. The car was lifted over the side of the ship, placed on the ice and a layer of protective grease removed, the mechanic Bernard Day started the engine. The car was standing on the sea ice which was covered in about 8 inches of loose snow. In the words of an observer:

"The wheels in duty turned violently round ... burying themselves to such an extent that the car moved not an inch"

A few hours later the car was hoisted aboard again, motor transport in Antarctica had not got off to a good start. The car was effectively disregarded as far as transport over snow was concerned.

Eventually the car was used to some moderate effect as seen in the pictures above, but the wheels meant that it could only run on hard smooth surfaces which are not so common in Antarctica. Usually it was used as far as possible until the wheels became stuck in snow at which point the men would resort to man hauling the sledge while the car driven by Day went back to the base or ship again.

It was used to useful effect in the laying of stores to establish two supply depots for the party led by Edgeworth David with Mackay and Mawson who successfully set out to reach the southern magnetic pole, a 1260 mile journey. The car established depots 10 and 15 miles from the winter base, ironically suffering from overheating of the engine, so the men had to wait in the cold for it to cool down again before it could run. The journey itself was completed by manhauling the sledge.

MOTORING IN ANTARCTICA.
The driver of Lieutenant Shackleton's Arrol-Johnston car, employed in the British Antarctic expedition of 1907, writes giving his experiences of motoring in Antarctica. He says:

"My first Journey was in August, when I took some of the southern journey grub, about 1500lb weight, on two sledges and three people up, sitting on the back member. For the first eight miles the ice was very good, but after that it was covered with drifted snow. I did about four miles an hour on this surface and about eight on the ice, over cracks and everything, some of them being about 1 ft 6 in across. I firmly believe the old car would go anywhere, she could stand anything. The temperature at this time was about 35deg (F) to 15 deg (F) , being the lowest I drove her in. This was one of the longest journeys. I did about 5 miles. I calculated out the whole distance covered while I was down there, being about 500 miles quite. Eighteen hundred pound was the heaviest load I pulled with three people. When I took the southern journey and the supporting party away - nine people in all - it was blowing 30 miles per hour and 30deg. of frost, the coldest ride I ever had or ever want, head wind all the way. I expect you wonder if I enjoyed it down there. The only thing I can say Is I never had a better time in my life, and never wish to be under a more able leader. I forgot to tell you that I had to take the lubricator off the engine, as the oil got solid in it, so I had to pour about a cupful through the lubricator holes in the crank case every few miles, and carry my oil tin in front of the exhaust ports so that it would keep warm. I also rigged a dish round the throttle, which I filled with petrol and lit to warm the inlet pipes. 'This I thought was rather dangerous, but I never had an accident, and it worked well. The heavy wheels were useless because I spent about twelve days of valuable time lightening them, and then they would not work. They weighed 270lb each, but when I had finished they weighed 100lb each, and were more serviceable, they  sank into the snow with their own weight, let alone that of tile car also." 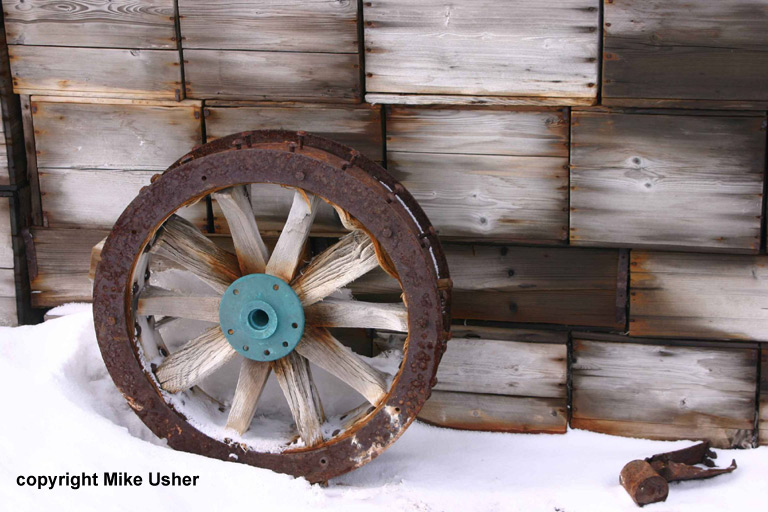 The spare wheel from the 1907 Arrol-Johnston left behind at the Cape Royds hut, picture taken in 2005.

The car was shipped to New Zealand from Antarctica when the expedition was over and was then reported as being shipped to England in mid June 1909 to be presented to the "English Museum". What happened to it after this is unknown.

Some parts remain art Cape Royds and the skis are held by the Canterbury Museum in Christchurch NZ.

The Arrol-Johnston motor-car, which accompanied the Nimrod expedition, was the centre of much curiosity yesterday morning, when it was photographed outside Messrs Hawkes and Son's garage. The car was afterwards towed through the city.