L'Astrolabe and Zéléé
Ships of the Polar Explorers

Below the Convergence: Voyages Towards Antarctica 1699-1839
Alan Gurney Buy

Wonderfully dramatic tales of courage and despair cleverly woven into the timeline. The author has managed to keep the impetus of one hundred and forty years worth of incredible hard ship alive with interspersed facts, tales of joy and of tragedy and loss. We can all learn both from the history and the spirit of the men he writes about. 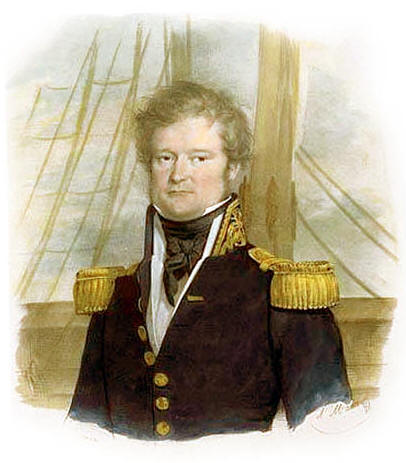 
In 1825 the Coquille (shell) was re-named L'Astrolabe, the name of a previous ship that had disappeared in 1788 . She had just returned to France from a three year scientific and geographic voyage to South America and the islands of the South Pacific.

A further voyage followed to Australia and the Western Pacific where amongst other aims, she tried to find some trace of an earlier trip made by the original L'Astrolabe after which she was named. Traces were found and some artefacts returned to France.

In 1836 Emperor Louis Philippe of France wanted France to play a part in the exploration of the Southern Seas. As he saw it an imbalance had arisen, though it was 60 years since the British ship Endeavour under Captain Cook had entered the ice and though British and American whalers and sealers, had been in Southern waters for over 50 years, France had yet to play any active role. Dumont d'Urville in Astrolabe would lead and would be accompanied by another ship La Zéléé captained by Charles Hector Jacquinot. Seven scientists accompanied the crews on the voyage.

Captain Jules Sébastien-César Dumont d'Urville was fifty years old and crippled by gout, as he went aboard the Astrolabe he overheard one of his men wondering if he would actually survive the voyage. He was promised a reward by the king for each degree passed beyond 67° south and "whatever you choose to ask for" if he reached the South Pole.

The ships left Toulon on September the 7th 1837, the aim to locate the southern magnetic pole.

On January the 22nd 1838 the ships came across Antarctic ice in the Antarctic peninsula region, d'Urville described it:

"...a marvellous spectacle. More severe and grandiose than can be expressed, even as it lifted the imagination, it filled the heart with a feeling of involuntary terror; nowhere else is one so sharply convinced of one's impotence. The image of a new world unfolds before us, but it is an inert, lugubrious, and silent world in which everything threatens the destruction of one's faculties."

They were unable to make much progress as their ships were sail only, they sighted the previously named Palmer Peninsula and then sailed for Chile. Scurvy affected the crew and two men died while 22 others deserted the ships or were too ill to carry on.

They sailed across the pacific in more temperate and tropical climes before heading south again to Tasmania arriving in November 1839. They set sail for Antarctica once again on the first of January 1840 and on the 19th sighted a part of the continent where the first ever landing on continental Antarctica was made. The area was described by d'Urville as " a formidable layer of ice... over a base of rock" it was named Terra Adélie after d'Urville's wife. Seeing a new kind of penguin, he named that too after his wife.

They determined the approximate position of the southern magnetic pole before heading back to Tasmania and New Zealand arriving back in Toulon France on November the 7th 1840.

At a cost of 22 crew dead and 27 deserted, they had brought back more natural history specimens than had ever been obtained in a single voyage before. Dumont d'Urville's account of Astrolabe's third voyage took up 23 volumes and 5 atlases. The publication was completed by others as Dumont D'Urville died with his wife and only remaining son from four children in a blaze following a train accident near Versailles two years after his return.