Antarctica may seem like a land of perpetual winter, but even here there are seasons. What is winter like in Antarctica? Which are the winter months? and how cold does it get?

Winter in Antarctica
Seasons and Weather 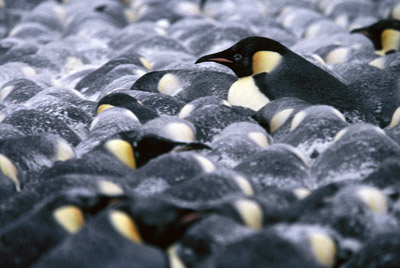 The polar regions have very pronounced seasons, though they are not like the four roughly equal seasons that many of us live with. The polar regions are usually described as having just a summer and winter. There is a spring period where things are clearly changing, but it is much shorter and less pronounced than most of us are used to. In the autumn or fall, the absence of trees means there is no clear indicator and it is less pronounced then even the polar spring.

Antarctic Summers are short and cold with lots and lots of daylight. The days are very long with the sun above the horizon for over 18 hours in midsummer at 60°S, the northern-most limit of Antarctica, add in the twilight hours and it never gets fully dark at this time. As you go further south, the days get longer still until and in the deep south, the sun is above the horizon 24 hours a day for weeks on end.

Antarctic Winters are long and very cold with long dark nights that may last for weeks . The dark doesn't last as long as the summer light as there is twilight after the sun sets below the horizon and before it comes up again.

Southern tip of Victoria to edge of Antarctica
1,860 miles

So the answers to questions such as "how cold is it in Antarctica?", "How much daylight is there in summer and darkness in winter?" depends on where you are. Places on the Antarctic continent can be as far apart as Miami and Hudson Bay, Athens and Trondheim or Australia and Antarctica. Those places have very different climates and the differences can be just as large in Antarctica, it's just that the range is entirely one of degrees of cold.

Other factors are important and also influence temperatures other than closeness to the South Pole. High altitude makes it colder and low altitude less so, the closeness of the ocean makes it warmer and isolation inland makes it colder. The coldest place of the examples given below is Vostok, which while 780 miles from the pole is at a higher altitude and is deeper inland, being further from the coast than the pole itself.

Wind also varies dramatically according to place. Antarctica has what are called "Katabatic" winds, these form when cold dense air falls in the interior and then flows down the slope to the sea sometimes building up to hurricane force as it does so, up to 190 mph / 300 kmh at the coastal edge. The result is that the deep inland, high altitude, coldest regions have relatively little or no wind whereas continental coastal areas in particular have very significant winds, leading to those areas that aren't so cold in temperature terms often having huge wind-chill factors.

In the deep south, the year is one of extremes where there is constant daylight in the summer and constant darkness in the winter. At the Pole itself it is either constantly daylight or constantly dark, each lasting for 6 months of the year.

When the sun disappears in the winter, the temperatures fall dramatically and don't really rise until it comes back again. This can be seen in the graphs above of The South Pole and Vostok in particular when darkness arrives at about the March equinox and then the sun comes back again at the September equinox, peaking at December when the tilt of the continent towards the sun is at its extreme. Places that are less far south don't get so cold in winter and the differences between summer and winter become less dramatic as you move away from the Pole.

Midwinter - 21st of June, the middle of the Austral (southern hemisphere) winter. The earth seen from the perspective of the sun. The whole area within the Antarctic Circle is tilted away and not exposed to the sun for 24 hours a day, there is no direct sunshine but there is twilight spilling over the edge.

Midsummer- 21st of December, the middle of the Austral summer. The earth seen from the perspective of the sun. The whole area within the Antarctic Circle is now visible to the sun 24 hours a day.

Mid-winter's Day. Antarctica as seen from a position in space above the South Pole, the tilt of the earth means that the area within the Antarctic Circle doesn't get any direct sunlight, places on the edge will get twilight from the sun just below the horizon, this is the extreme extent of the polar night.

Mid-summers Day. The area within the Antarctic Circle receives 24 hour sunlight.This is the extreme extent of the polar daylight.