Communications have changed the isolation and experience of being in Antarctica more than any other single factor.

This is Apsley Cherry-Garrard in Antarctica in 1911 with Captain Scott.

This is Michal Krzysztofowicz in Antarctica in 2016.

1911 - Letters and parcels carried by 3 ships a year that came in the brief summer months.

No radio. Communication was by writing on paper or being with someone to speak to them. Arrangements for off base rendezvous or similar would be for a particular day, give or take a couple with no way of alerting of a change of plan. Emergency messages delivered on foot.

There was no such job as radio operator, communications manager or similar.

1986 - Letters and parcels carried by 3 ships a year, plus 200 words a month each way to nominated address by fax machine and a satellite link, back to the UK and then by post.

Daily (work) messages were sent and arrived by fax. Personal phone calls available by satellite at own expense ($19 / £13 a minute 2016 equivalent). When off base VHF radios were used, these were required for boating, a daily radio sched was recommended when staying off base overnight.

The base had a communications specialist, a Wireless Operator Mechanic (WOM) present year round to install, run and maintain the telecommunications equipment.

2016 - Michal's base sees two ships a year about two months apart in the summer months which bring and take letters and parcels. I asked him for an up to date perspective of communications.

How many hours a day do you have internet access?
The Internet is on normally for 24 hours a day. We're still able to use a geostationary satellite, I think we're as far South (75Â°S) as is possible to see the geostationary satellite; any further south and it would disappear below the horizon. We're using a large Satellite Dish - it's diameter is 3.6m if I'm correct and it's pointing almost horizontally. There is a brief period just before the last sunset and just after the first sunrise when the sun gets exactly behind the geostationary satellite we use and that seems to interfere with the signal for about 5 minutes or so. But this only takes about a week or so around that time of the year when the sun is low above the horizon.

How reliable is that access?
It's very reliable. In fact we've recently had a link upgrade and it has been very comfortable to use, as long as nobody downloads any large files without managing the bandwidth. It's a bit more of a challenge to use in summer, when there are upwards of 60 people on base, but it's still usable.

Presumably there are limits on live streaming or large file up/down loads?
That's correct. There's no Skype or anything similar and people are asked not to use Youtube or other streaming services. With regards to downloading large files, we can either do that ourselves as long as we manage the throughput (and generally tend to limit it to about 10% of the link bandwidth or so), or people can ask the Comms Manager to schedule a managed download for them.

Is Skype or similar available or allowed?
It's generally not allowed. We have used it once or twice for semi-official skype calls with certain people as a publicity thing. For example, on a Midwinter night, we've had a Skype conference with people who wintered at Halley 50 years ago. But normally we're asked not to use Skype for personal calls, and when we use it for official purpose, the link needs to be managed (which effectively means everyone is requested to not use the Internet throughout that time).

Radios seem quite prominent in many of your pictures, are they a requirement when going outside?
Especially in Winter everyone should have a radio with them each time they leave the modules. In addition, even when on the modules, most people tend to carry those around with them. Similarly in Summer, although when there are a lot of people on base there may not be enough radios for everyone - in such case, every team needs to have at least one radio between them. In addition, all vehicles and external buildings / cabooses have VHF radios installed too. We also have HF radios on base. These are connected to the large comms array east of the modules, and are used to maintain comms with field parties as well as with aircraft. These radios tend to be used primarily in summer, however the Midwinter broadcast is also transmitted on HF, and we were able to pick it up and listen to it, which was very nice.

One thing you haven't asked about is the phones. We're using VoIP phones and the phone calls are sent over the satellite link alongside the Internet traffic. We can use phones for personal calls, but have to use calling cards to cover the cost of the calls. We're therefore not as isolated from our loved ones as people were even 20 years ago. I can call home every evening if I want to and the quality is pretty amazing, to be honest - sometimes to the point that it's easy to forget we're 14,000km away from home.

A radome at the South Pole station. As well as being a very effective form of communication, this dish antenna can be easily protected by a radio transparent dome from the wind, snow, frost and other aspects of the weather. It is much less vulnerable to damage than the large radio antenna arrays that used to be the main radio communication equipment in the past, though these are still used for communications with aircraft and field parties. 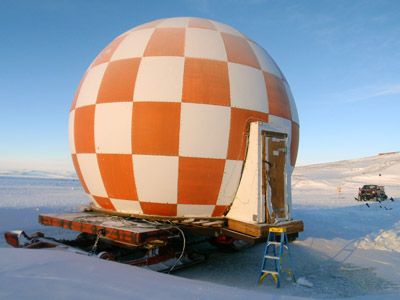 A radome on a sledge for easy movement at McMurdo Station, what you see is a protective covering, inside is a dish antenna that can be aimed anywhere within the sphere. This is used to help co-ordinate aircraft movements coming in and out of McMurdo. It is used at a runway that is seasonal and out on the sea-ice, hence this radome needs to be moveable.

Inside a radome in Antarctica, whatever the weather does outside, the inside is almost unaffected.

Changes in communications with Antarctica over the years

In the earliest days of Antarctic exploration there was no radio, so ships and their crews would not be heard of for literally months on end, even a year or more, until the expedition returned to port or sent mail by a ship leaving Antarctica.

Later on radio was invented, but communications were rather "official" being about the work of the base or ship rather than personal communications. The radio communications themselves would be at a pre-arranged "sched" (scheduled) time and would be via a land station bordering Antarctica. This situation lasted for several decades into the late 20th century.

The next major step forwards was with the advent of telex communications when the base personnel were given a monthly allowance of 100 words be sent in each direction to a pre-named contact person, the message was then forwarded by post. Aside from this, communications of a personal nature between Antarctic personnel and the rest of the world was by traditional letters which went in each direction from one to three times a year depending on how deep in Antarctica the base was and how many ships visits there were.

By the 1980's, satellite communications arrived along with fax machines which speeded things up and also increased the amount of traffic, Personnel now had 200 words and more per month in each direction and the possibility of making telephone calls (at exorbitant cost! - paid by the individual)

With the advent of the internet and broadband, the outside world is now available via your keyboard and monitor screen almost on demand via a satellite link, which is dependent on the satellite position and weather conditions. Many bases now have 24 hour internet connections, though those that are very far south more typically have a live link for several hours each day when a suitable satellite is visible.

So in the last 100 years, base personnel have gone from being able to only send letters 1-3 times a year to being able to email and post their thoughts, news and pictures on websites and blogs on a daily basis.

Antarctica however doesn't yet have broadband as we think of it. Skype video calls are generally not permitted as they take too much bandwidth, likewise any streaming services. It is perfectly possible to send almost any amount of email you could type to anyone in the world including attaching pictures and maintaining a blog.  There is even now (since 2006) an annual short film competition between the various stations across Antarctica held in the middle of the winter which is made possible by the internet. Films are made over a weekend and send to each other over the web 48 hour Antarctic Film Festival

There are many Antarctic blogs started each year, like many diaries they often start off with good intentions and then become a little sparse or fizzle out, even the best ones then sometimes mysteriously disappear after a while. As a result I no longer link to individual live blogs, Google is your friend here.